After a decade of spectacular growth, China's feed industry is stuck in the doldrums. China is now the world's largest feed-milling country, but the industry has been shrinking as it deals with an overall slowdown in animal production, high Chinese prices for raw materials, and sheds excess capacity.

A Chinese market analysis group, Nongbo net, estimated that China's output of manufactured feed fell 5 percent to 183.6 mmt during 2014. This would be the second straight year of declining output in the industry following a period of extremely rapid growth that outpaced growth in production of meat and eggs. 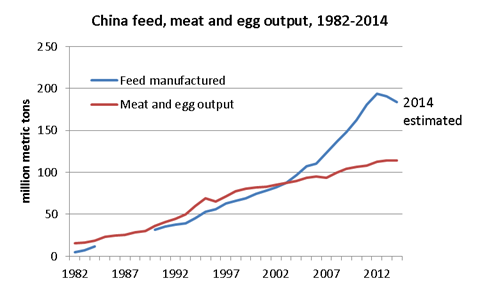 A global survey of feed mills by a company called Alltech estimated China's manufactured feed output at 182.7 mmt, the world's largest. The United States was number 2, with 172.5 mmt, and Brazil was a distant third, with 66 mmt. Like Nongbo Net, the Alltech survey also reported a decline in China's production during 2014. China's decline held back global feed output which grew only 2 percent during 2014, according to the Alltech survey.

These numbers are only estimates. The Nongbo estimate is based on feed industry association statistics that showed output was down 1 percent in the first three quarters of 2014. A strong fourth quarter was expected, but the fourth quarter turned out to be worse than expected. Therefore, Nongbo estimates that output for the year declined.

One of the factors contributing to the decline is a massive re-licensing of feed mills conducted by the Ministry of Agriculture that reportedly shut down 30 percent of the licensed feed mills during 2014. The MOA campaign was related to stricter regulation of the industry to weed out mills that were not up to standard in their equipment and product quality assurance. The government-induced shake-out also follows years of complaints about excess capacity in the feed industry. While China's feed industry includes a number of large, sophisticated companies, thousands of small, low-tech mills stayed in business until the MOA stepped in to shut them down (or at least take away their licenses).

The Nongbo Net report also attributes the decline in production to a depressed livestock sector. They estimate that feed production for hogs, egg-layers, meat poultry, and aquaculture declined to varying degrees. Hog feed output was estimated to have fallen 5 percent after a big decline in hog prices early in 2014 and disappointing demand during the customary peak holiday season during the fourth quarter. Poultry output was severely affected by avian influenza. Many small scale egg producers quit. Feed for egg-laying hens was estimated down 11 percent and feed for meat poultry was estimated to fall 2.5 percent. This was the second year in a row of decline for the poultry sector. Aquaculture feed output was also hit by bad weather in southern provinces during the peak season. Aquaculture feed was estimated to fall 4.5 percent. Feed for ruminants was the only type of feed that increased, up 5.7 percent. Ruminants--mainly cattle and sheep--use less than 5 percent of China's manufactured feed.

Reports of the Chinese feed industry's depressed state appear inconsistent with China's booming imports of feed raw materials during 2014. However, the imports are substitutes for China's expensive domestic corn crop which is being stashed in government warehouses. Authorities bought up nearly 70 mmt of the 2013/14 corn crop and are on pace to purchase even more this year. As of January 25, 2015, authorities had purchased 39 mmt of the 2014/15 corn crop for the temporary reserve, ahead of the pace of 2013/14 purchases. The purchase program runs through April 30. 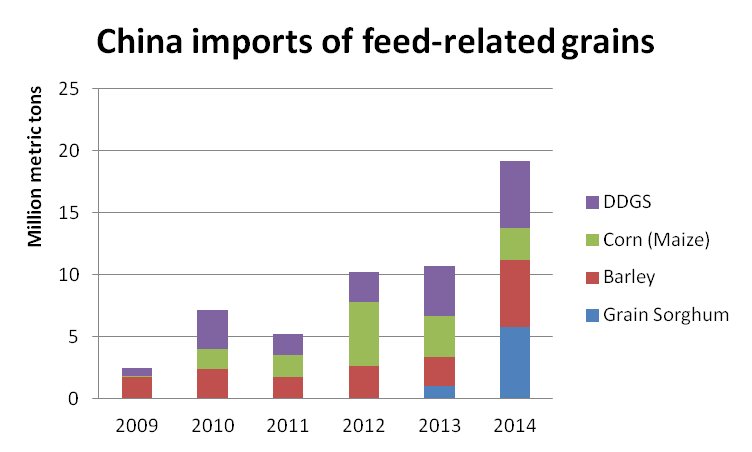 Most of the temporary reserve purchases are in the two leading corn-producing provinces--Heilongjiang and Jilin--which are also a long way from the top feed-milling provinces along China's coast and its southern provinces. The task of Chinese officials concerned with national self-sufficiency is to stop feed mills from buying American corn and instead force-feed them expensive, moldy corn stored in thatched bins in distant provinces.

Dim Sums, I am delighted to have found your blog! Analysis as up-to-date and as relevant as yours is not easy to find, especially for free. I'm a fan! You can find my blog (much inferior to your own) at,
longkansascitywheat.wordpress.com

nice blog !! i was looking for blogs related of animal feed companies . then i found this blog, this is really nice and interested to read. thanks to author for sharing this type of information.

Indeed a very interesting blog on Chinese agriculture! I look forward to each new article.

I would like to know if you have an idea of why these data are not consitent with the estimations.

Thank you very much in advance if you have time to answer my question.