After buying Smithfield Foods in 2013, the new Chinese owners wasted no time in introducing pork from their new American acquisition into the Chinese market.

In May 2013, Shuanghui Group--China's largest pork processor--announced its acquisition of Smithfield Foods--the largest U.S. hog and pork producer--and the acquisition was complete by September of that year. 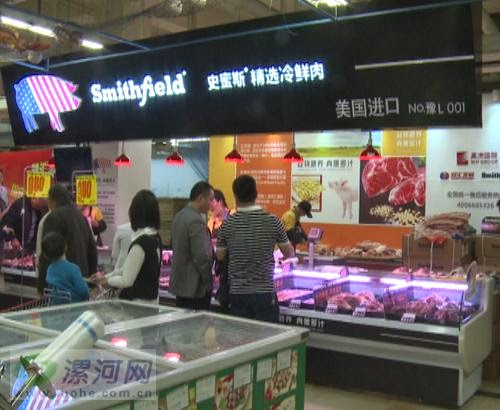 Smithfield sales counter at a supermarket in Zhengzhou.

In March 2014, the first 325-ton shipment of Smithfield pork arrived at a new temperature-controlled bonded warehouse at the Ningbo port in China. The pork was sold in special pilot promotions at "Smith" brand sales counters placed in supermarkets in Zhengzhou, Henan Province. Shuanghui is test-marketing the Smithfield pork in its home province and plans to expand to all key cities in Henan by next year.

The advertising emphasized taste, nutrition and food safety. Consumers were told that pigs are fed nutritious grain and the meat is more tender and juicy than other pork. Consumers were assured that pork is fully traceable and is kept chilled in each step of the processing and distribution process. 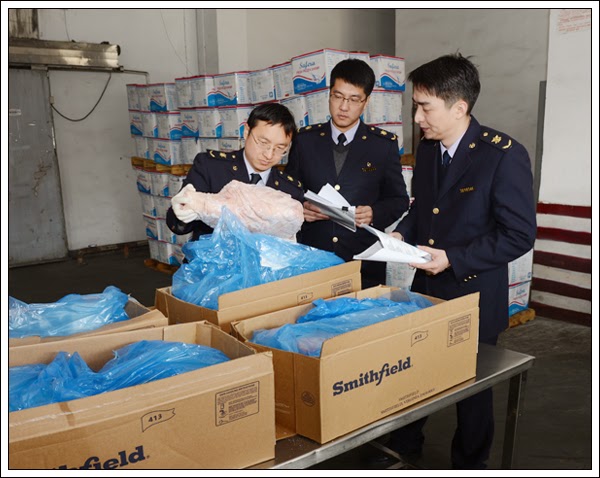 Inspected by Chinese customs agents at the port in Ningbo

The promotional price is 15%-to-20% more than common pork. After the promotion, the normal price is expected to be around 14.9 yuan per 500g. (That's about $2.20/lb...so how do they manage to ship it across the Pacific ocean and sell it cheaper than in this blogger's American supermarket about a five-hour drive from Smithfield?)

The imported pork has been blamed for depressing prices in the Chinese industry this year. Shuanghui points out that their 5000 tons is a tiny share of the 50-million-ton industry. They say they are just giving Chinese consumers more choice.

In November 2014, two Shuanghui executives explained that the traditional "kill pig, sell pork" approach is changing. The company's strategy is to concentrate on raising hogs in America and Europe while raising chickens in China. Shuanghui also acquired Spanish pork company Campofrio in 2014.  Shuanghui plans to build a 50-million-chicken project in China during 2015. 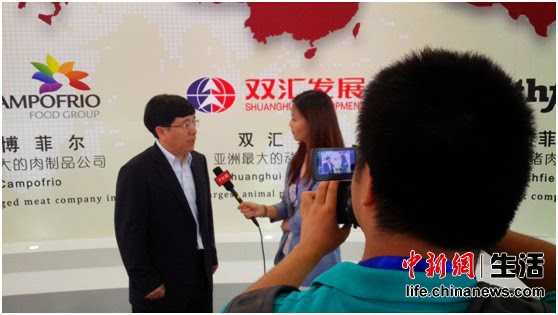 Shuanghui set up a subsidiary company in Shanghai to manage the Smithfield pork business. It plans to set up processing plants for imported pork in Zhengzhou, Weiyang, Shanghai, and Shenyang. Construction on the Zhengzhou plant is planned for 2015.

Shuanghui subsidiary plants in Heilongjiang Province gained access to the Russian market in late 2014. The first shipments in November were about 6000-8000 tons. The Shuanghui shipments to Russia are taking the place of...Smithfield pork which was banned by the Russians last year because it's American.

So...now Shuanghui's Chinese pork is going to Russia, in effect, replacing Shuanghui's Smithfield pork which is now being shipped to China. Got it.
Posted by dimsums at 8:53 PM

Hi there, what a great web blog. I spend several hours on the net reading sites on various topics. And, I really would like to praise you for writing such a fabulous article.
Smithfield Foods