China is in a dither about its swelling imports of agricultural commodities. The imports reflect a massive misallocation of resources. As China imported more commodities it also stored away massive amounts of its own harvest to keep prices high. 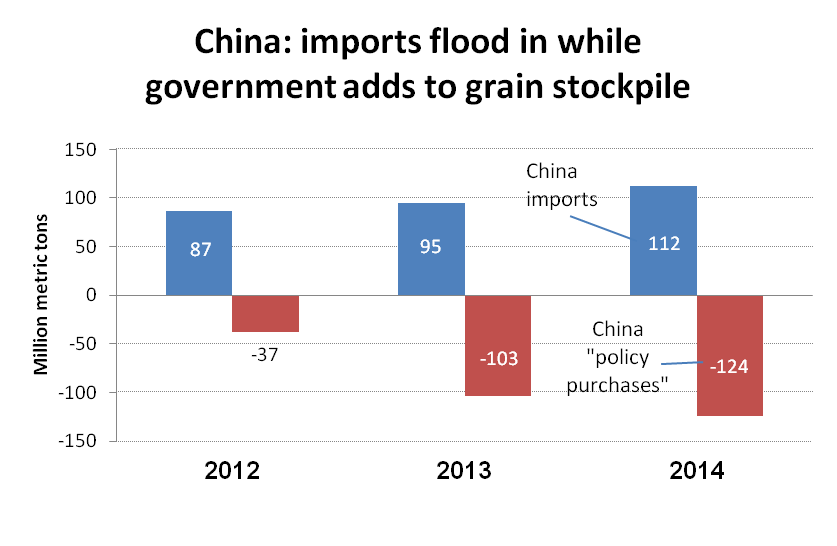 Note: Imports for calendar year of soybeans, other oilseeds, grains, distillers grains, fish meal, and cassava; policy purchases by the government at minimum prices or for "temporary reserves."
Source: dim sums blog using data from Chinese customs statistics.
During 2014, Chinese authorities purchased 123.9 million metric tons of grain to support prices under its minimum purchase price and temporary reserve stock-holding programs. That was 35 percent of all grain purchased in the country and 20 percent of China's entire grain crop last year. The volume of policy-style purchases was up 40.7 mmt from 2013. The director of China's grain bureau said that the government's price support programs encouraged the country's farmers to sell a higher proportion of their crop than usual despite the large  harvest last year. It was reported at the grain work conference that the programs increased farmers' income from crops by 55 billion yuan, or roughly US$ 8.9 billion during 2014.

The grain bureau will not tell you that their policies are extremely wasteful. During 2014, China imported 112 mmt of commodities while authorities were removing 124 mmt of domestic grain from the market to put in their stockpiles. This bizarre situation has intensified over the last three years. Imports have grown from 87 mmt to 112 mmt from 2012 to 2014 while the government's price-support purchases grew from 37 mmt to 124 mmt. 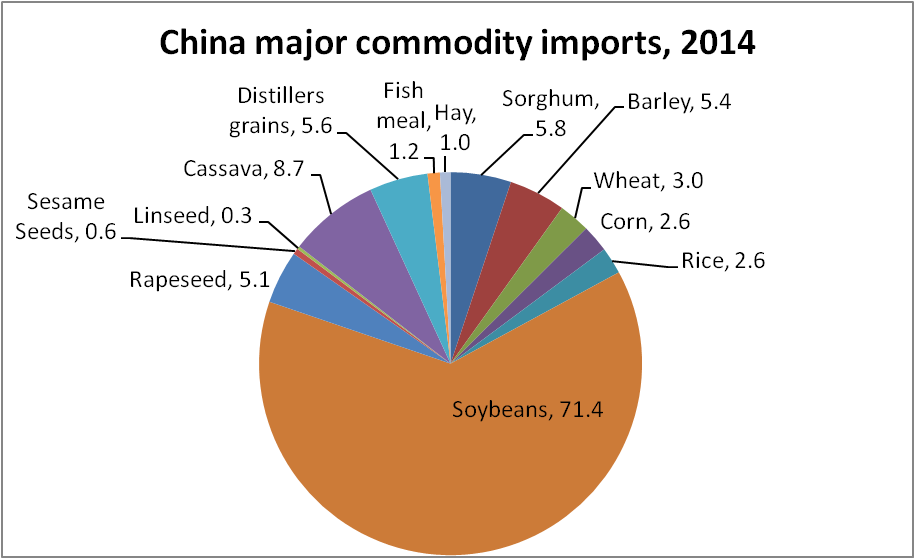 Of the 112-mmt import total, 71 mmt were soybeans. The other 37 percent of the total was composed of various oilseeds, grains, fish meal, and hay. The total also includes 8.7 mmt of cassava which is used as a substitute for corn and other starchy commodities for making starch, biofuel, alcohol, and feed. Barley, sorghum and distillers grain imports swelled to a combined 16.8 mmt, most of it to substitute for pricey domestic corn that went into government reserves.

While Chinese farmers were getting higher prices, U.S. farmers have seen a steep drop in their income. China's demand for imports boomed because global prices dropped over the last two years. In December, USDA's Economic Research Service estimated that U.S. farmers' gross receipts from crops dropped 25 percent during 2014. This is about three times the gain in Chinese farmers' crop receipts Chinese officials attributed to their price support programs during 2014.