China has been rejecting shipments of U.S. corn for nearly 11 months now with no clear explanation. There has been much speculation about what Chinese officials are up to. Now there is another possible motivation for the inscrutable action against U.S. corn: they wanted to break U.S. dominance as China's nearly exclusive source of corn imports.

In 2013, Chinese news media grumbled about the United States supplying 98-99 percent of China's corn imports. Expedited approval of Argentina as a corn supplier in 2013 was attributed to an urgency to create competition for U.S. corn. However, Argentina has only managed to send one shipment of corn to China since then.

China struck a phytosanitary agreement with Brazil to supply corn in November 2013, a move that was interpreted by Chinese observers as a measure to break the dominance of the United States as China's near-exclusive corn supplier. However, the Chinese apparently didn't know that the GMO corn variety MIR 162 is also planted in Brazil. Brazilians are frustrated that only 2900 metric tons of their corn has made it to China--all of it before the agreement was signed.

Chinese analysts have linked the strategy of diversifying corn importers to the refusal of 1.25 million metric tons of U.S. corn since November 2013. A Xinhua News Agency economic analyst told Number 1 Financial News that approval of the genetically-modified corn variety must take into consideration "external trade factors." He noted that China had been pursuing a corn import diversification strategy at the same time it was rejecting U.S. corn.

The recent surge of Chinese corn imports from Ukraine suggests a strategic approach to corn supply. A Grain and Oils News article reporting recent customs data was titled, "In the future our corn import will be much more diversified." According to the article, China is being subjected to international market fluctuations and has signed agreements with Argentina, Ukraine and Brazil since 2012 to diversify its corn suppliers. Based on customs statistics, the article celebrates the decline in the U.S. share of corn imports from 98% in 2013 to 64% so far in 2014. Ukraine's share is 20%, up from zero last year. Another article reporting corn import statistics notes the diversification strategy and notes that China imported no corn from its traditional supplier, the United States, in August 2014. 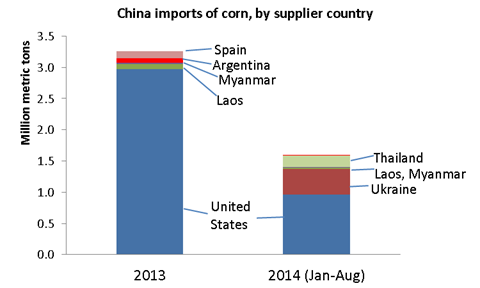 In March, Reuters reported that large private Chinese feed mills were purchasing Ukrainian "non-GMO corn" and barley since U.S. corn had been rejected. This was said to be fulfillment of the agreement with Ukraine to repay loans with grain. The agreement was signed in 2012, but only 163,500 tons had been imported before this year. Ukrainian corn shipments started arriving in July and totaled over 400,000 tons by August. It is unclear why it took two years to get the Ukrainian grain trade moving.

The implied motivation for the import diversification strategy is that Chinese buyers think they are being overcharged for U.S. corn. Note that the agreements with new corn suppliers were struck during 2012-13, when U.S. corn prices were unusually high due to drought. U.S. prices have dropped since 2013's record harvest and are now a little more than a third of Chinese corn prices.

So where is this concern about overcharging for corn now that U.S. prices have dropped? Chinese corn consumers are now paying nearly three times as much for corn as their U.S. counterparts.

As usual, a Chinese decision causing great friction appears to be based on multiple considerations that are not revealed to outsiders. Negotiations with the Chinese to resolve the situation are unproductive since negotiators don't know what their Chinese counterparts are trying to achieve. The sclerosis of Chinese decision-making contributes to the confusion. Chinese officials often make a decision based on a flawed interpretation of current circumstances; when circumstances change officials lack flexibility to adjust ill-considered decisions.
Posted by dimsums at 6:13 AM