On October 16, 2014, China's National Development and Reform Commission announced that next year's minimum price for wheat will be held steady at this year's level. Many people in the Chinese wheat market expected the minimum price to be raised as it has been for the last seven years. Market commentaries in Futures Daily and in China Grain Net believe the non-change in the minimum wheat price is a reflection of current market conditions and represents a change in policy direction. 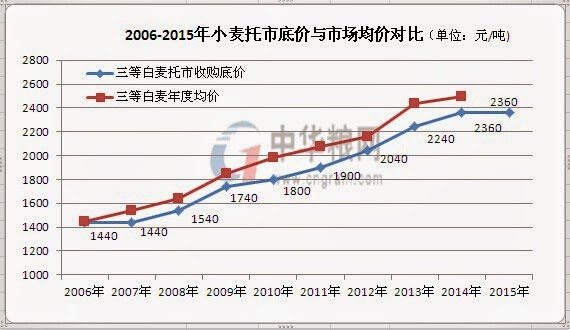 The minimum price for wheat was raised every year from 2008 to 2014, a total of 920 yuan/metric ton (64 percent) over 7 years. In 2008, authorities adopted a practice of announcing a higher minimum price in the fall--planting time for the winter wheat crop--to assure farmers of a price high enough to cover rising production costs. This is the first time the minimum price was held steady since 2007.

Analysts say that a number of factors go into the price-setting decision. Authorities consider increases in production costs, the net returns to various competing crops, supply and demand conditions, and international prices. This year, China's wheat supply has increased after a big harvest--authorities purchased 27 million metric tons this summer to prevent wheat prices from falling.

According to Futures Daily, Chinese farmers have been shifting land to wheat from other crops in recent years. Wheat is the most mechanized crop and has low labor requirements. With rural labor now scarce, farmers have been reducing their plantings of other crops like cotton, rapeseed, and even garlic and replacing them with wheat. Therefore, authorities are not worried about attracting farmers to grow wheat.

A wheat trader in Henan Province said the market was expecting a modest increase in the minimum price. He attributes the decision to keep the minimum price unchanged to the loose supply-demand situation and a plan to gradually close the gap between relatively high Chinese wheat prices and lower international prices.

Another factor is the impact of high wheat prices on profits of flour mills. A pattern of "flour weak, wheat strong" squeezed the profits of flour mills, causing some small and medium size mills to shut down and others to scale back production. The government also has a campaign to boost and upgrade agricultural processing industries, so easing upward pressure on costs makes more resources available for upgrading facilities.

Keeping the wheat price steady is also viewed as part of a grand transition in China's approach to domestic agricultural support. In the spirit of letting the market have a "decisive role" in resource allocation, authorities plan to stop intervening directly in agricultural markets, instead letting markets set prices based on supply and demand. They plan to give farmers assurance of good returns by giving them direct subsidy payments based on the difference between the market price and a target price.

Some say leaving next year's minimum price unchanged is laying the foundation for transition to a more market-oriented policy. Market participants will build their price expectations on market supply and demand factors instead of government announcements. Authorities are reportedly eager to introduce a target price subsidy for wheat and other commodities after they see how pilot programs for soybeans and cotton turn out this year.

The talk about the market determining wheat prices is inconsistent with other announcements by Chinese authorities that government grain reserves must be increased. Surely the government plans to hold reserves so it can intervene in the market. Moreover, big government purchases of grain to fill official granaries send confusing demand signals to the market. The confusion multiplies when reserves are kept in secrecy.

While Chinese authorities are probably sincere about the "decisive role of the market" rhetoric, they really don't trust the market. They are very good at managing the market when they can build in one-way bets by raising exchange rates and prices every year. But the policies build imbalances and the mechanism seizes up when prices stop going up. They design elaborate policy mechanisms that are impossible to implement and are soon forgotten.

Chinese officials also misjudge market conditions. Food Security Strategy for 1.4 Billion People, a book published by China's State Council published exactly two years ago warned that global grain prices had bounced back to levels higher than the 2008 grain-price crisis, and "The whole world has now entered an era of high grain prices..." The book promised to steadily increase the level of grain prices. Two years later the world is struggling with low grain prices. [Since 2012, the season average price for U.S. wheat has fallen 20%-25% while the Chinese minimum price has been raised 15%.]

The Chinese food security book worried that U.S. use of corn for biofuel is a food security threat since it limits grain available to other countries. Yet two years later one of China's biggest imports is DDGS, the by-product of U.S. ethanol production. Moreover, Chinese authorities have announced their intention to roll back DDGS imports by rejecting shipments where they find unapproved GMO material.

Chinese officials are obsessed with stability, self-sufficiency, avoiding reliance on the United States and other objectives that market outcomes would produce. With so many conflicting objectives, intervention is guaranteed to continue.
Posted by dimsums at 8:37 PM