Imported meat is making inroads in the Chinese market, pitting the interests of consumers against those of producers--no longer one and the same. Nevertheless, getting meat into China appears to be a risky game, given a strategy of tightening and loosening import procedures based on domestic market conditions.

A July article in the Guangzhou Daily observed that the rising import of meats is generally welcomed by consumers, but is greeted with resentment by people in the domestic meat industry.

The Guangzhou Daily reporter visited supermarkets to get the views of consumers and managers on imported meat. The manager of one store told him sales were up 20%-40% so far this year. Most of the business is relatively low-priced cuts of Australian beef. Sales of high-end beef--128 yuan for the most expensive T-bone--are increasing as fast.

Another manager told the reporter that he once tried selling imported beef in 2008-09, but it didn't last long. Since the end of 2013, however, sales have taken off and he now sells 3-to-4 shipments a week.

The appeal is quality and taste. A Ms. Liu told the reporter, "I feel the quality of imported beef is much better. I feel confident about feeding it to my child. The price is a little high, but I can bear it."

Some have reservations about imported beef. It's hard to tell the unit price because imported steak is sold by the piece. The reporter calculated it himself and found the imported steak was 80-to-120 yuan per kg, about three times the price of domestic beef. Another lady who said she lived in the United States for a while claimed that the inspection is not as strict in the United States as in China. (Hmm, like most Americans, she probably learned all she knows about meat from 60 Minutes.)

Supermarkets in Guangzhou say they earn high profits on imported beef. One manager says he earns 20 yuan on a 300-gram Australian steak, what he calculates to be a 70% gross margin. Trading companies earn lower margins but their volume is much larger.

While price does not seem to be the major selling point, the rapid increase in retail beef prices has slowed down since China's imports have increased in the last two years. 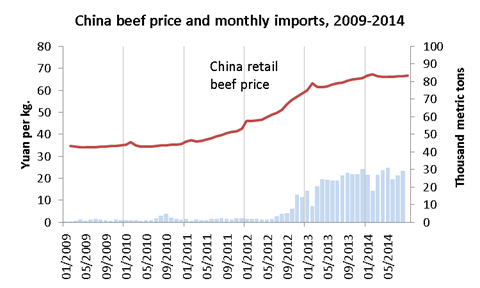 ﻿
Hmm, I wonder why there was such an abrupt increase in beef imports from virtually nothing in 2012 to a steady stream in 2013?

In January 2014, a Ministry of Commerce official endorsed beef imports as a means of supplementing short supplies. He explained that while China is overall self-sufficient in food, "appropriate imports" of certain items in short supply like beef are OK.

He said the Ministry makes import policies based on the relationship between domestic supply and demand. When there is a deficit, import licenses can be issued automatically, and inspection and processing procedures can be accelerated. What he doesn't mention is that the process can work in reverse: slower approvals and foot-dragging by customs officials when imports are not wanted. Would the beef keep flowing if prices started falling?

The official explained that imports and domestic production of key products are monitored closely and a twice-monthly report on contracts signed, shipments, and port arrivals is issued to "guide" companies to make rational importing decisions. The official explained that Chinese companies investing in beef abroad is another measure to boost imports by securing a stable channel for imports.

The pork industry seems to be more sensitive about imports. Very little imported pork is sold directly to consumers in supermarkets. Imports in 2013 were equal to roughly 1% of China's reported pork output, and most of that was offal sold to processors of sausages and other meat products.

Nevertheless, many in China's pork industry are convinced that any news of imported pork has a negative effect on the Chinese market. The manager of a hog farm in Zhaoqing told the Guangzhou Daily reporter that Shuanghui imported 4500 tons of [Smithfield] pork in March during a depressed period for the pork market. The manager said, "No doubt imported pork drives the price down, forcing indebted small and medium-size farms into bankruptcy. Therefore, the government should be cautious about approving pork imports."

A September article from the Ministry of Agriculture news net explores the impact of imported pork. While the article repeats the factoid that pork imports amount to just 1% of China's pork production, the author insists that any news of pork imports hurts the confidence of hog farmers. The author observes that, "In fact, policy-style pork imports have become one of the government's measures for regulating the domestic pork price."

The author further reassures readers by telling them that pork exports often face trade barriers in the form of inspection and quarantine regulations. He points out that "lean meat powders" are allowed for raising pigs in the United States and Canada, but China's laws don't permit it, so such pork can't enter China.
Posted by dimsums at 9:57 PM