On October 24, Vice Premier Wang Yang finished out a speech on building irrigation facilities with some comments that reveal China's rural policy challenges. While there is a sense of urgency in his remarks, Wang exhorted everyone to calmly consider the future and--like a good socialist--make a new plan.

English language news media picked up Wang's admonition to increase control of grain imports and crack down on smuggling to deal with record-high grain inventories, but other comments in the speech are interesting.

The comments came at the end of a speech on building irrigation facilities where he warned that rural reforms and development tasks are extremely arduous. He exhorted every level of government and locality to do a good job on agricultural and rural work as they carried out irrigation and water management construction.

Until now, China seemed to be address rural problems by spending more and raising prices, but that seems to have come to an end. Wang warned that agriculture faces "three ceilings" on prices, subsidies, and commodity inventories. Agriculture also faces a rising floor in escalating production costs. The problem is how to maintain farmer production incentives and keep production stable under these "two pressures," said Wang. How can sustainable agricultural development proceed with excessive consumption of resources and environmental pollution growing? Wang admonished listeners to "calmly assess the future," "sort out ideas for agricultural and rural work," and "scientifically" formulate a plan for the future.

Wang assured his audience that the government is pondering new policies to address the many new problems, situations, and challenges facing agriculture and rural areas as it formulates a new five-year plan for 2016-20. For example, Wang said, the government is contemplating how to keep increasing spending on rural affairs and increase rural incomes as the economy decelerates and growth in financial revenue slows.

Wang said the minimum price programs for wheat and rice should be carried out, and "temporary reserve" stockpiling for corn--the policy that created the mess--should be started at the appropriate time. Wang said the decision to announce the 2015 minimum price for wheat at the same level as this year is a result of pressure from international market prices and is an "extremely vigorous price signal" to producers.

In his comments on the fall grain harvest, Wang warned about the conspicuous problem of a tight grain storage situation with record-high grain inventories as the fall harvest is underway. With Chinese grain prices higher than world prices and grain imports rising, marketing the new grain crop faces a lot of problems, Wang said. He called for making space for the new crop in private sector storage facilities. Companies should be "organized" and "guided" to purchase grain from farmers. Banks should ensure that they have plenty of money to buy the grain, so farmers are able to sell it.

Wang's comments also included an exhortation to carry out the communist party's fourth plenum's task of instilling the "rule of/by law" in agriculture and rural areas. This was not explained but probably means standardizing regulations and they way they are enforced throughout the country--a stiff challenge in a country where "the hills are high and the emperor is far away."

Wang closed out his speech by reminding comrades to strengthen water management construction and do a good job on rural work. "The responsibility is great and the task is formidable," said Wang. 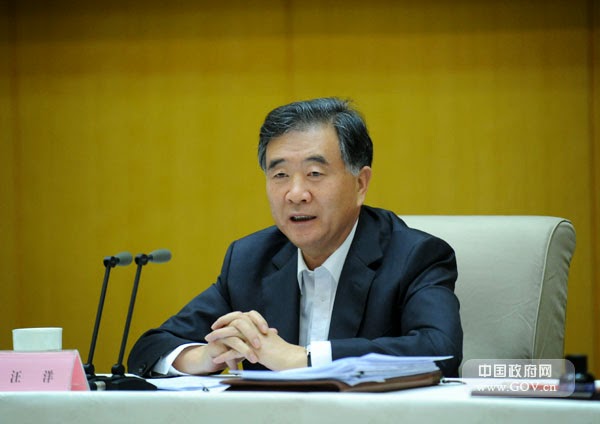