China's rainy wet weather this summer has facilitated an unusually large population of planthoppers in many areas of southern China. These tiny winged insects suck sap out of plants and lay eggs. The resulting "hopper burn" turns rice plants brown and ultimately kills them. 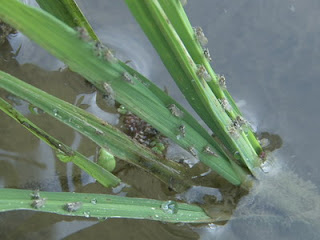 In Hunan Province insect problems with the rice crop are up 30 percent this year and Hunan's planthopper infestation is said to be the worst in 20 years. Hunan officials blame the weather. They organized two massive sprayings of the crop earlier this summer, but effectiveness was limited by ineffective use of pesticides and the lack of labor since so many farmers were away working in cities. Despite these problems, Hunan officials insist their spraying will limit the effects of the bugs. 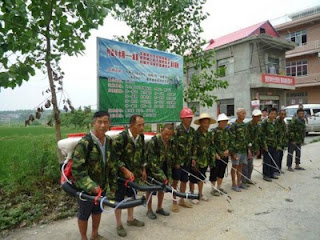 A reporter visiting Zhijiang saw no visible evidence of planthoppers in the field. However, a technician described the planthoppers as a hidden crisis. He picked a rice plant, shook it, and gray planthoppers fell out. The technician said that 30,000 bugs can turn a rice field brown in a week's time.

Planthoppers were first observed this year in Zhijiang in early May. An adult lays 200 to 400 eggs and produces a new generation in just 20 days. In Zhijiang, farmers plant early, late and single-season rice crops, so the bugs can find suitable fields all summer long.

The Hubei article offers 61-year-old farmer Song as an example for farmers to follow. Song said he broke out in a cold sweat in July when he found 25,000 planthoppers in his field. However, a couple of days after spraying, he says there are few bugs left and now he feels relieved. The technician says they left one field unsprayed and there are now 40,000 planthoppers there. 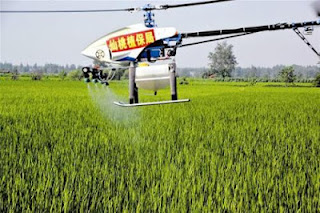 The Hubei article says city people shouldn't worry that planthoppers will affect rice prices. It says they have treated two-thirds of the single-season rice crop and there shouldn't be much effect on production. According to the article, rice prices are affected by multiple factors: weather, quality, and grain imports; the effect of planthoppers on rice prices is "not clear."

An article by a Zhejiang University Professor (in English) worries that planthopper problems in China are becoming more widespread and lead to estimated losses of 2 or 3 million tonnes annually. He attributes the increase in planthopper problems to increasing pesticide and fertilizer use and the adoption of hybrid rice varieties that are favored by planthoppers. He cites two chemicals--imidacloprid and fiprinol--used to treat seeds which have become "virtually useless" because planthoppers have developed resistance to them.

According to the International Rice Research Institute's (IRRI) fact sheet on planthoppers, an outbreak occurs when pesticides kill natural enemies that would eat their eggs. IRRI recommends avoiding "indiscriminate use of insecticides" to control planthoppers since the chemicals kill natural enemies. An IRRI video warns about the rapid increase in insecticide-resistance in China, warns that pesticide-spraying is counter-productive and explains a method for controlling planthoppers without insecticides.

It's unlikely that Chinese farmers or officials would be receptive to IRRI's integrated pest management method since it requires leaving a strip of vegetation in fields to support bugs that are natural enemies of planthoppers--that would mean fewer rice plants per hectare and a lower rice yield. The preference is to plant rice as densely as possible and depend on chemicals to wipe out any pests that show up. The Pesticide Action Network criticizes China and Vietnam's boost in pesticide funds in response to a big planthopper outbreak in 2005: their fact sheet argues that pesticide use during the 1970s created the planthopper infestation in the first place.

If there is considerable damage to the rice crop, officials probably won't admit it since rice is such a politically sensitive crop and they are so worried about food prices. The Hunan article mentions in passing that the province has a target of increasing early-season rice production by 700,000 metric tons. It is rare for Chinese officials to acknowledge that a target was not attained. Thus, you can bet on another statistical increase in rice production regardless of the weather or pests.
Posted by dimsums at 8:31 PM