Chinese news reports say that large portions of the corn crop in China have been hit by an unusual infestation of army worms, a type of moth caterpillar. According to the reports, the problems have been apparent since early August and are a result of heavy rains in July. The effect on Chinese corn markets is tempered by relatively weak demand.

Farmers say army worms are present each year to some degree. The moisture and high temperatures in late July and August this year have been favorable for corn, but also ideal for army worms.
Reports say that 30 million mu (2 million hectares) have been affected by the pests. This includes 9.9 million mu in Hebei Province, 8 million mu in Inner Mongolia, and 1.8 million mu in Jilin Province. Parts of Liaoning, Heilongjiang, Shandong and Guizhou have also been seriously affected. 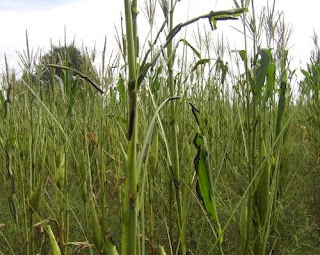 The army worm problem will affect the crop to some degree, but the effects are not as serious as a drought. Army worms tend to affect concentrated areas and can be controlled to some extent with pesticides. The estimated 30 million mu affected is less than 6 percent of the estimated 510 million mu of corn planted this year.

The news comes at an unfortunate time since USDA just slashed its estimate of the U.S. corn crop last week by 16.7%. Before the army worm invasion became evident, it appeared that China was going to have a big corn harvest. USDA also raised its estimate of China's corn crop from 195 million metric tons to 200 mmt last week.

According a futures industry news account, the effect of a tighter supply on corn markets is tempered by relatively weak demand in China. Corn starch processors are said to face a theoretical loss of 190 yuan per metric ton at current corn prices of 2400 yuan and starch prices of 3000-3050 yuan/metric ton. Alcohol producers are losing 640 yuan/metric ton. Feed mills' demand for corn has slacked off due to the big decline in hog prices this year.
Posted by dimsums at 6:21 AM