Did Vaccines Kill These Pigs?

A farmer in Henan Province who claims his pigs were killed by a vaccine erected a shrine to his dead animals outside the gates of his farm to publicize his grievance against the vaccine company. The company quickly responded, offering a different side of the story.

According to an article posted online, the farmer administered a vaccine for pseudorabies to over 300 of his pigs on August 1. He claims to have followed the instructions provided with the drugs and the directions of the salesman. Soon after administering the vaccine, many of the sows miscarried and other pigs died. He claims that over 200 sows miscarried, losing 2600 piglets (13 piglets per sow), and 50 others died. He claims the vaccines caused him to lose 1 million yuan.

A regional manager for the vaccine company said they will compensate farmers if there are verified losses due to their vaccine. In this instance, the farmer was not able to get any compensation. The farmer says he called the phone number on the package but no one answered. Another family member says the salesman was not authorized to sell the vaccines. When asked if the vaccine could be tested, the farmer said there is only one lab in the country where such a test could be done and they don't do testing for individuals. 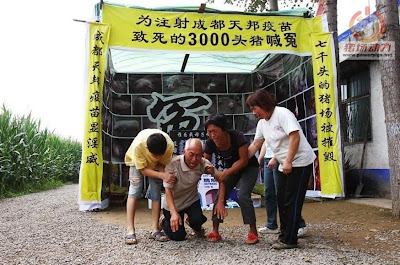 A farmer's memorial to his dead pigs, made of pipes covered with plastic sheeting.

The farmer built a crude memorial hall similar to those used to honor dead relatives. He covered the three walls with photos of his dead pigs and displayed ear tags of all the deceased with photos attached. The farmer banged his head on the ground until it bled and he was restrained by relatives. 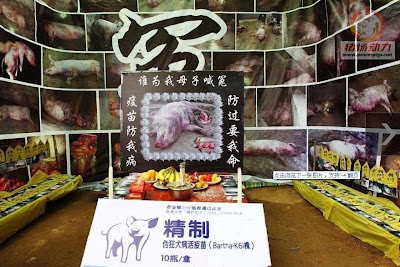 A black-framed photo in the center memorializes an "innocent" sow with offerings of fruit and displays a vaccine box. The frame proclaims "a vaccine against my disease and against my life." A banner over the entrance reads, "3000 pigs killed by administering [name of company]'s vaccine." A pair of couplets on the sides read, "Despotic [name of vaccine company], 7000-head pig farm destroyed."

The company responded to the report with an online announcement that offers another side of the story. According the the company's investigation, the pigs were vaccinated on August 1, showed signs of listlessness the next day, and began miscarrying on August 3. On August 14, a company technician visited the farm and found the pens were dark with little sunlight (a video posted by the farmer is consistent with this description). Pigs were emaciated and had rough skin. Six to eight were asthmatic. The temperature at the farm was extremely hot--40.5 degrees centigrade--and feed was poor in quality.

The technician learned that additional abortions occurred on August 13. Stillborn piglets had yellow fluid around their noses. Blood serum samples from the dead pigs were sent to the provincial academy of agricultural sciences to determine the cause of death.

The company held a meeting on August 7 to look at quality of raw materials, manufacturing process, production records and quality control for its pseudorabies vaccine. They found no problems and tests of the vaccine found no problems either. The company claims to have sold 426,000 doses in 20 provinces with no other problems having been reported.

It's not surprising that the company's investigation finds no responsibility for the deaths. To the company's credit, the information it provided is more detailed and plausible than what the government provides after incidents like this. The company's quick and detailed response obviously is prompted by the high degree of competition in the vaccine industry. Market competition  provides companies with strong incentives to respond to problems and make corrections when problems arise.
Posted by dimsums at 9:02 PM