China almost surely has the smallest farms in the world. The average family's land holding is about an acre, and many have less than that. Now Chinese authorities are trying to encourage a shift to "large farms" that are still small by standards in most countries.

Like everything else in China, "large farms" are not easily described or generalized. An article by two agricultural economists in the communist party journal Qiushi explains that "large grain farms" (粮食大户) are farms of at least 100 mu (16.5 acres) in northern provinces and 30 mu (5 acres) in the south. These are what Americans would call "hobby farms," but they are considered the agricultural vanguard in China. The Qiushi article says that large farms are mechanized, integrated with processors, use high quality seeds, and are more profitable than micro farms.

The Hunan article identifies several types of large farms. About 15 percent are individuals who want to operate more than their contracted plots and rent from neighbors. Another 20 percent are farmer cooperatives. 60 percent of large farms are operated by farmers who offer machinery services, due to "needs and policy" (probably the machinery purchase subsidy). Some other large farms are connected with mills or other processing enterprises.

Large farms are diverse operations. One article describes a real estate tycoon who was raised in the countryside and operated a series of businesses before deciding to return to agriculture in a big way at age 50. He acquired 48,000 mu (7900 acres) of marsh land in northern Jiangsu and spent 10 million yuan building a 27-kilometer canal to bring in fresh water to flush the salt out of the soil in 2006. He claims to have gotten rice yields of 500 kg per mu and is hailed as a hero by the local land bureau.

Another article describes a farmer named Cao in Guangdong Province who operates a custom-farming business with his four brothers, father-in-law, his wife's uncle and a hired hand. He has five transplanting machines and charges 35 yuan per mu. They have seven rice harvesters and charge 50 yuan per mu. They transplanted rice on 1500 mu and harvested 5000 mu. Their net income last year was 230,000 yuan (over $35,000). He acts as a sales agent for four machinery companies and collected 32,000 yuan in commissions on 40 sales last year. Mr. Cao has 10 mu of his own land and subcontracts 210 mu of rice paddy from others. He gets grain-planting subsidies of 88 yuan per mu (about $34 per acre). The land "owners" keep the subsidies for 40 mu of the land he farms, but he gets 15,840 yuan (about $2,475) in subsidies for the other 180 mu.

In Kunshan, a highly urbanized area near Suzhou, a report complains that land rent is the biggest expense for large farms. In this region, a new mechanism is being used to set the market rental rate for farmland and the rent has risen from 250-300 yuan per mu in past years to 700 yuan this year. The report warns that costs are outpacing prices and says that large farms hope the government will limit increases in land rent. It also asks for more subsidies: a price-plus subsidy (a bonus for each kilogram of grain sold) and subsidies for pesticide and machinery services.

A farm operated by a company in Anhui Province complains about lack of financing for large farms. This farm rents 1300 mu (215 acres) and has cash expenses of 5 million yuan ($780,000). The operator applied for a bank loan but has no collateral since rural houses can't be mortgaged. He says loan guarantee companies are expensive. For a 1 million yuan loan you have to pay 7.8 percent plus an assessment fee, so you only get 910,000 yuan.

The Hunan survey reports that about 25 percent of large farms produce for rice mills under contract. At least one rice mill's contract can be used as security for a loan guarantee. One local branch of the Agricultural Bank of China makes loans of 500 yuan per mu to large farms.

The Hunan survey credits large farms for boosting the area planted in rice. It says large farms plant two crops of rice per year while a lot of small-scale farmers have been leaving their land idle at least part of the year. While the survey claims large farms are more apt to use better techniques and disseminate them to other farms, they don't necessarily get higher yields. Average yields reported for 58 farms in the Hunan survey show that the highest yields were obtained by farms with 20-30 mu. The lowest yields were obtained by the smallest and largest farms. Calculations based on the survey data show that large farms of 500-1000 mu also had higher average unit cost, at 1.42 yuan per kg of rice, versus 1.23 yuan for farms of 20-60 mu. 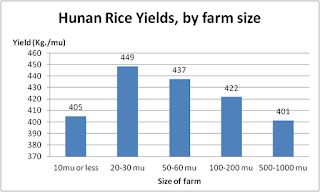 A number of provinces are giving subsidies to large farms since they often don't get subsidies attached to the land and pay high rent. Hunan and Hubei give cash awards and several others give subsidies per mu or awards for renting large contiguous areas of land.

With bigger farms, subsidies are bigger and there is more incentive to lie and cheat. In Zhejiang Province, a farmer was arrested and fined for falsely collecting a bonus meant for large farms. You get 460 yuan for each 1000 kg delivered to government grain depots. This farmer signed a contract to deliver 100 metric tons to the grain bureau, claiming that he planted 300 mu when he only had 2 mu. He bought grain from Anhui Province to fulfill the contract. The contracted sale price was less than what he paid for the grain, but he covered the loss and still made a profit after collecting the 44,849-yuan subsidy bonus. He was arrested for lying about being a big farmer and misusing state subsidies.
Posted by dimsums at 6:49 PM