One of the "dirty" secrets of China's pork industry is the widespread degradation of water quality. The advantage of pigs--and the reason they are the source of over 60% of meat in China--is that they can and do eat just about anything. Their disadvantage is that their digestive system is inefficient. Lots of undigested matter comes out the other end. In past decades pig manure was spread on fields as organic fertilizer. But in the age of concentrated pig production--hundreds of pigs in a single location--the manure is concentrated. Plus, you have to clean out pig facilities to keep them sanitary and prevent disease. This requires lots of water which has to go somewhere after the cleaning is done.

This blog reported on pig pollution last year, again exactly one year ago, and in 2010. Many localities have tightened up regulations on pig farms and the Ministry of Environmental Protection called attention to the problem in 2010. Officials show visiting delegations nice clean farms and tout their massive program to build 40 million methane digesters and waste treatment tanks, but the problem of water pollution from pig farms remains a serious external cost of China's quest to maintain its diet of home-grown pork.

An article from Fujian Province last month begins by proclaiming, "The Minhou Creek is terminally ill!" This article describes a reporter's visit to a tributary of the Pujiang River which flows into the provincial capital of Fuzhou. The creek's banks are covered with lush vegetation but the water is murky and gives off a foul stench. Some fishing enthusiasts arrived by car with fishing poles in hand but were shocked by the filthy water and smell.

Local people claimed that the water used to be clear. In the last few years some outsiders arrived and set up about ten pig farms along the banks of the creek even though the local government had banned pig-farming next to the creek. The farms dump waste into the stream and its water is no longer suitable for drinking or washing clothes.

At intervals along the banks of the creek the reporter found bags containing partially decomposed pigs. These are pigs that died of infectious disease. Local people said dogs feed on the carcasses. One person observed that there would be a big accumulation of dead pigs if the dogs didn't eat them. 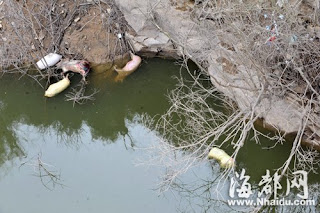 The creek is upstream from the drinking water supply for Fuzhou, the provincial capital. As early as 2009 a county environmental official wrote an article warning of the deteriorating water quality. The creek’s water quality began deteriorating by 2007. A lake downstream showed contamination with cyanobacteria and nutrification. Testing of the creek's water from 2005 to 2009 showed rising concentration of ammonia.

The reporter described one of the farms. Pigs were kept in brick structures surrounded by plastic sheeting. A hole in the wall allowed waste to drain into a plastic pipe which led to the creek. 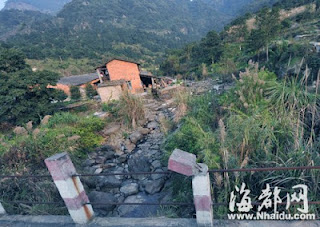 The drain from a pig farm empties into Minhou Creek (source: Taihai net)

The county claimed to have carried out a check of pig farms starting in 2009 and claimed to have dismantled 100 of them in 2011. However, the reporter found a posting about the creek on a web site for public complaints asking, “After 3 years of complaints why is there still so much pollution from pig farms?”

In Yongkang Prefecture, Zhejiang Province, a news site this month was contacted with a plea from a village resident who reported that many people in his village have blood in their urine. The villagers suspected that extremely high concentrations of nitrites, manganese and ammonia in their drinking water was the cause. They suspected that a neighboring pig farm was the source of the problem.

Testing showed the 37 of 86 people in the village had occult blood (blood cells that are not visually detectable) in their urine. Most were elderly people in their 50s and 60s. Three village representatives took water samples to the city disease control center for testing. The samples did not meet the standards for drinking water. They showed turbidity, visible matter, and excessive amounts of nitrites, manganese and ammonia. The manganese content was 150 times the allowable standard.

The pig farm raises 600 Tibetan black "fragrant" pigs, presumably a premium native-style breed that sells at high prices in supermarkets. The farm was built on three-fourths of an acre of vacant (i.e. not farmed) land surrounded by hills. Small pigs wandered around in the barn. Pig manure was piled on the fields next to the road, and a dead pig lay where it had been discarded near the entrance to the farm.

The farm had two sedimentation tanks and a methane gas digester for treating waste. The boss told the reporter the waste water and pig manure are put in the methane digester. After fermentation it is put into the sedimentation tank and treated. However, the water is still dirty and contains white foam after it goes through sedimentation. This water flows through a pipe into the stream that supplies the village's drinking water.

The waste water from periodic cleaning of the facilities cannot be treated in this manner. This water contains bacteria that can't be killed in the methane digester. This water goes straight into the creek.

The boss displays an animal quarantine certificate, business license, and veterinary certificate, but the farm has not been evaluated by an environmental bureau. The boss openly acknowledges that tests would show that the farm affects the local water quality if the government checked it. He says he wants to move the farm elsewhere.

The vice mayor of the town says he has sprung into action after receiving complaints from the masses this month. They quickly set up a water system. Last week they finished laying the pipes. They will send fire trucks to deliver water every morning until the system is complete in a week or so. The environmental protection bureau did an investigation and confirmed that the farm was a problem. Soon they will assess penalties on the farm.

Last September in Shandong Province's Linshu County, a 67-year-old villager told a reporter that the river nearby had turned murky last summer. The water began to stink and fish started dying. His village of 1600 people gets its drinking water from the river. Their drinking water began to give off an odd smell and became alkaline. 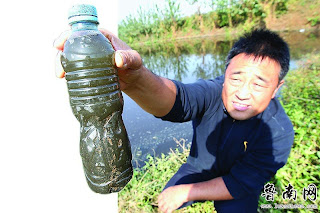 Last September three small pollution sources were shut down by the local government. However, a large pig farm 2.5 kilometers away across the provincial boundary in Jiangsu Province's Donghai County--possibly the largest source of pollution--was still operating and allegedly dumping waste into the river. There was nothing the local government could do. According to the reporter (writing in September 2011), the villagers had to sit silently as manure flowed downstream to their village.

An official from the Linshu County environmental protection bureau said there's nothing they can do about the pig farm since it's in a different province. He says they have been in communication with their counterparts in Jiangsu and are trying to come up with a mechanism for dealing with the cross-border pollution problem.

The pig farm reportedly has acquired waste treatment equipment, but excavation equipment on the site show that the farm is in the process of expanding and creating even more manure. 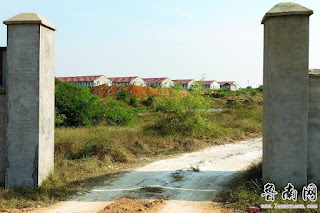 Economics Development is a process whereby an economy’s real National Income Increases over a long period of time, and if the rate of development is greater than the rate of population growth, then pre capital real income will increase. Banks are the custodians and distributors of liquid capital which is the life blood of our commercial and industrial activities.