A team from the China Grain Net reported on a tour of rice-producing areas in Hunan and Jiangxi Provinces last week. The team found that rice supplies are tight in the region. At a grain depot in Hunan's Xiangtan County, a trader said that there is only a little late-season rice from last year in the market that is bought sporadically at 1.38 yuan per 500g. In northern Jiangxi Province rice mills complained that the business is very tough this year. Prices they pay for paddy rice are up and profits are virtually nil.

Rice mills in Jiangxi and Hunan have been buying modest amounts of cheap rice from Vietnam and Pakistan as a cost-saving measure to mix with local rice. However, the quality and taste of the cheap imported rice--mostly from Vietnam--is poor and is not well-received by consumers. They use no more than a 20% proportion of imported rice.  According to the reports, rice mills are afraid to use a lot of it because it might harm their brand's reputation. In Jiangxi, they are only using the imported rice for local sales while their shipments to Shenzhen and Guangzhou use only good quality rice. The imported rice is said to be a temporary stop-gap measure. They say the Vietnamese rice has a limited effect on the market in China.

The team emphasized the exodus of labor out of villages and land left uncultivated, especially the phenomenon of switching from double-cropped rice to a single crop. The reports emphasize this year's Ministry of Agriculture campaign to promote concentrated rice transplanting. This program gives subsidies to help companies and other units produce rice seedlings that are transplanted in fields. This is said to save labor, help the rice mature earlier and raise yields by 10-20% over the method of sowing seed in the paddies.

Hunan's Xiangtan County is one of the top grain-producing counties in China and a focus of the rice-transplanting campaign. The team visited Two Board Bridge Village where officials arranged for production of 50 mu of seedlings that were provided free to villagers, which raised their enthusiasm for planting an early rice crop. Hunan Province budgeted 120 million yuan for this camapaign but the village committe said the transplanting campaign cost the village 30,000 yuan. The village has 960 mu of rice paddy which officials said was all planted in early rice. 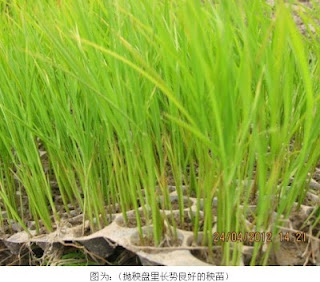 The team visited Mr. Zhao who transplanted early rice on all of his 6 mu during March 20-23. Last year he harvested 1000 jin per mu of early rice around July 15 and sold it for 116 yuan per 100 jin. This price was well above the minimum support price of 102 yuan last year. This year costs are up, but the village covered the cost of seedlings, trays, and plastic sheeting. Mr. Zhao estimates this year's production cost will be around 930 yuan per mu, up 30 yuan from last year. He says the subsidy is 140 yuan per mu this year, up from 120 yuan last year. (If these numbers are right they are about twice as high as in other places.) Mr. Zhao estimates you can make about 200 yuan per mu from planting early rice. By comparison, you can make 120 yuan per day working off-farm.

Mr. Zhao would like to rent more land to expand his production. However, he has some elderly neighbors who are not inclined to rent out their land because they think they can earn an amount equal to the rent by planting rice on the land themselves. In Hanshou, another Hunan county, a rice mill boss wishing to expand his "production base" also complains about some farmers don't want to rent out their land. He said he hopes the government can guide them to participate in land transfer.
Posted by dimsums at 10:42 PM