Livestock farms are increasingly viewed as a nuisance and a hazard, and more localities are implementing regulations to restrict their numbers. China's first pollution census results released in January showed that livestock waste was the largest contributor to water pollution, perhaps adding momentum to the trend.

Rural officials have to set aside "appropriate" zones in rural areas designated for livestock and poultry production and announce this to the public. In those zones, livestock densities have to be kept to a reasonable level.

Apparently, livestock and poultry farms are not completely banned in one of these "livestock-raising-prohited zones" (禁止养殖区). The regulations say the number and scale of livestock farms must be strictly controlled and you can't build a new farm or livestock-raising community (养殖小区). The trend encouraged by the government now is to construct concentrated livestock-raising zones like this: 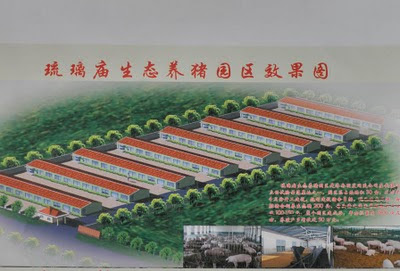 A rendering of the planned ecological hog-raising zone for a village in Dezhou of Shandong Province.

This article was carried on dozens of web sites which probably means it is meant to tell the public and farmers that the government is serious about getting pollution from livestock farms under control.

These are not the first regulations on livestock. Dongguan in Guangdong is often cited as the leading example of a city that banned hog farms. A google search shows that Shanghai had such regulations in 2004. Shanghai now has very few small hog farms.

What appears to be new is that the regulation is extending beyond cities to agricultural provinces like Shandong.

Earlier this year, Heilongjiang Province introduced regulations of livestock farms. It set minimum sizes for farms: 50 head for cattle; 300 head for hogs; 3000 birds for poultry; 200 head for sheep; 1000 for rabbits; 300 for foxes, mink and racoons; and 50 for deer. (Yes, foxes and deer are raised commercially in China.) Farms have to be in places in accord with the local land use plan with suitable air, water, and soil and at least 1 kilometer from populated areas, roads, and slaughter facilities.

It may take a while for these regulations to be enforced. Shanghai's regulations specify that the agricultural commission and environmental protection bureau jointly regulate livestock farms. The environmental protection people probably have less power in rural areas than in Shanghai. Nevertheless, there seems to be momentum toward controlling pollution from livestock and other types of agriculture.

These regulations seem to rule out huge swathes of territory for livestock farms. How can China supply the huge amounts of meat demanded by the population if livestock and poultry production can only take place in small areas? Can the huge concentration of waste in large farms be effectively treated and disposed of?

This trend also implies a shifting of livestock production further into the central and western provinces where there the development-pollution balances is still tipped toward development. This entails an accompanying change in the meat industry to producing chilled meat cuts in rural counties that are transported to big cities on the coast.
Posted by dimsums at 7:11 AM