Migrants Up, Wages Up

The National Bureau of Statistics (NBS) reports that 245 million rural people are employed in nonfarm activities, up 10 million from last year. Their average monthly earnings from nonfarm employment were up 21% from last year, suggesting rapid growth in wages (average hours of work decreased). The numbers reflect an exodus out of agriculture and rising opportunity cost of labor in farming.

Each year NBS surveys 200,000 rural laborers from over 7500 villages in 899 counties to ascertain the number and characteristics of rural people engaged in nonfarm employment. The survey total includes rural people engaged in a nonagricultural job or business for at least 6 months of the current year. It includes migrants working outside their home township and people employed near home (in their home township). 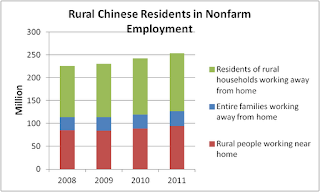 The numbers are another reflection of the socioeconomic transformation of the Chinese countryside. "Rural" and "farm" are no longer synonymous. Censuses show that there are roughly 250 million rural households, thus the new number suggests that there is on average 1 person in nonfarm employment from each rural household. The number in nonfarm employment increased 27.6 million from 2008 to 2011. The growth was faster than in 2009 (when the economy slowed due to the world financial crisis) but slower than in 2010.

High earnings in cities suck people out of the countryside. The bigger the city, the higher the earnings. In the largest cities (Beijing, Shanghai, Tianjin) earnings averaged 2302 yuan versus 2047 yuan in provincial capitals. In small (county-level) cities the average was 1982 yuan and in towns it was 1961 yuan. The proportion of workers with unpaid wages fell from 4% in 2006 to less than 1% in 2011.

Most migrants are deposited in work site enclaves. Half of migrant employees have housing provided by their employer or work unit, and 9% get a housing subsidy. Thirty-two percent of migrants live in an employer's dormitory and 16% live on their work site in barracks, shacks or in the place of business itself. Nineteen percent share rented quarters with others, 14% rent their own dwelling and 13% go home at night. Less than 1% of rural migrants own a home. Essentially, rural migrants are guest workers.

Migrants spend an average of 9.8 months a year away from home. They work 25 days a month, 8.8 hours a day on average. 84% work more than 5 days a week, 42% work over 8 hours a day, and 85% work more than 44 hours a week. The amount of time worked was down slightly from 2010, thus the increase in earnings reflects increased wages.

Based on these numbers, the average hourly wage of rural workers is equal to 9.3 yuan or 1.45 U.S. dollars per hour.  Based on 9.8 months of work at 2040 yuan per month, the average annual earnings of a rural migrant total 20,000 yuan or 3140 U.S. dollars per year. That's slightly less than the per capita household income of Chinese urban families.

Nonsalary benefits are becoming more common but relatively rare and migrants are mostly excluded from urban social insurance schemes. Only 17% of rural nonfarm employees have medical insurance, 14% are covered by a pension, 24% by worker's compensation, 8% by unemployment insurance, and 6% by pregnancy insurance. All of these were up by several percentage points from 2010. Benefits were received by about twice as many rural workers in the eastern region compared with the central and western regions.

While there is still a strong attraction to cities, the numbers indicate that it's getting easier to find a job near home in rural areas. In 2011, the increase in nonfarm employment was equally split between migrants and residents working near home (over 5 million each). This contrasts with 2010 when the increase in migrants (8 million) exceeded the increase in workers staying home (4.4 million). It's easier to find a job near home in the east: 62% of rural people working near home were in the eastern region. Migrants (those working away from home) are evenly spread over the eastern (32%), central (36%) and western (32%) regions. Most migrants (53%) work within their home province, while less than half (47%) work outside their home province.

Nonfarm employment is chiefly a guy thing: 65% of those in nonfarm employment were males. They tend to be young: 39% were between ages 16 and 30. However, participation by more mature rural people is rising. Nonfarm workers over age 40 increased from 30% of the total in 2008 to 38% in 2011. Those working near home are more likely to be married and older than those who migrate.

Manufacturing is the largest sector for nonfarm employment of rural people, accounting for 36%. Construction is the second-largest and has been the chief source of job growth. Construction's share of nonfarm rural employment grew from 13.8% in 2008 to 17.7% in 2011, the only industry with a big growth in share. The construction industry's importance is magnified by its high wages. Construction (2382 yuan per month) pays 24%-higher wages than manufacturing (1920 yuan per month). However, workers in construction are much less likely to receive benefits than are manufacturing workers. Hotels and food service (1807 yuan) and household service (1820 yuan) pay the lowest wages. Hotels and food service are also skimpy on benefits.

The migrant worker statistics reflect the concentration of capital and investment in cities. Rural people own virtually no assets except their house and their savings. Rural land is expropriated from farmers for the price of a few bushels of wheat and thereafter generates huge windfalls for developers and city tax coffers. This money sloshes around in the banking system and is doled out to big companies run by the cronies of government officials. City tycoons recruit unskilled migrants, sequester them at work sites for a few months, then send them on their way.  Loans are rarely doled out to small entrepreneurs.

The migration statistics also illustrate the problem facing Chinese agriculture. The most capable (young and educated) workers are sucked out of agriculture which promises low earnings (unless you can rent your neighbors' land and cobble together 10 acres or so) and high risk. Those who remain behind are old people who prefer the rural way of life. Money sent home from children in city dormitories lets the the old folks back home in the village refurbish their house and buy rice and TV sets. More and more, those who stay in the village can find nonfarm work nearby. Even though village people continue working their small plots of land, putting in a few days of work here and there, they have little incentive or inclination to improve their yields. Why should you build an irrigation system or an expensive pig barn if your land might be turned into an industrial park in a few years?
Posted by dimsums at 5:47 PM