Pig Pollution: Whom to Believe?

China has seen a wave a new large-scale pig farms operated by companies since 2007 when the government rolled out a series of policies and subsidy programs to encourage the sector to recover from a shortfall of pork that year and to re-engineer the hog sector into a "modern" industry.

Every pig creates a lot of waste. A 220-lb finishing hog eats 650-800lbs of feed and probably lots more water over 5-to-6 months. If only 220 lbs of that feed stays in the hog's body (as added weight), that means 430-780 lbs of feed (and lots of urine) comes out the other end in the form of manure and has to go somewhere. 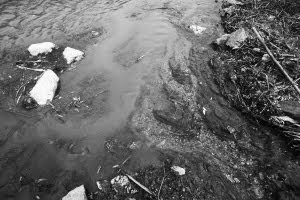 Water pollution observed by the reporter.

A reporter in Changchun City, of Jilin Province went to a village on the outskirts of the city to investigate the hog pollution problem. Some villagers complained that the stream running through their village had turned black, was full of foreign matter, and emitted an obnoxious odor. One villager blamed the dirty water for bringing pig manure and antibiotics and other stuff into his fish pond, killing off his fish in April. One lady tending a cow claimed that water gushing forth from numerous springs in their village used to be crystal clear and used for drinking and washing clothes, but now they can't even give the water to their cattle. They have to give them well water. Some onlookers watching the interview agreed, saying that even chickens and ducks don't dare go near the water now.

The reporter was led to a spring. He saw that the water was clear when it came out of the spring, but after 5 meters it flowed into a dirty creek.

The manager of the Houde company said they had started raising hogs in April 2008, and now have 13 barns. Of those, 4 are empty, 6 are "ecological" barns that don't produce waste, and 5 are common barns. The company has built a manure treatment lagoon using matching funds from the government, and the farm has approval from the environmental protection bureau although he didn't have anything to show the reporter. He claims the waste doesn't affect the village's water supply. But the manager admits the treatment system is "not perfect" and they don't know where the water actually goes.

The manager of the neighboring Yibang company shows the reporter their environmental assessment and assures him they have approvals from various government departments. This company has built an underground waste treatment pit with government matching funds. The Yibang manager insists that the waste from their farm does no harm to the village. However, he also mentions the company is waiting for more government funds to arrive so they can make further waste treatment improvements. He says the stream going through the village is mostly dry and only fills up when there is a heavy rain in the mountains. The Yibang manager says fish farmers use the pig manure as fish feed. He insists that the farmers that complained to the reporter must have "ulterior motives."

The village communist party secretary also supports the farms. He points out that there used to be 10 farmers raising pigs plus other kinds of livestock and poultry, and they all dumped their waste in the stream. Everybody gets their water from 10-meter deep wells. He attributes the worsening water quality in the stream over recent years to "climate change." He also insists the big hog farms have no negative effects on villagers and points out that the farms contribute a lot to the local economy.
Posted by dimsums at 9:44 PM