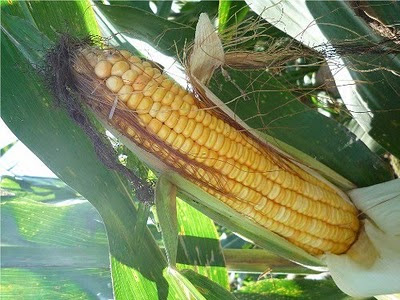 The China Grain Net (cngrain.com, affiliated with Sinograin, the government's grain reserve company) organized a crop tour of northeastern provinces in mid-September. The group investigated mostly the corn and soybean situation in Siping of Jilin Province, Qiqihar and Heihe in Heilongjiang Province.

The group found that corn area and yield are up from last year. This year's corn prices are good and farmers have been encouraged by government policies. A lot of farmers in Siping and Qiqihar have shifted area from soybeans to corn. In Siping, corn area is estimated to be 11 million mu this year, up 1.7 million mu from last year. Rice area is also up. However, soybean area is down about 50%. Soybean yields look better this year, but production will be down due to the fall in area.

Planting was late this year in Siping, so farmers chose early-maturing varieties. There have been some problems with flooding. In Qiqihar, this year's corn crop is estimated to be mostly 1st or 2nd grade, whereas last year it was mostly 4th and 5th.

The supply-demand situation in Siping is tight. There are two large industrial users that consume about one-third of the local corn, and two major feed manufacturers. These corn processors have very little corn on hand. Under the new rules, the two feed mills are qualified to buy corn from auctions of reserve corn, but industrial users are not. There is a lot of pressure to replenish inventories. The local grain reserve company also needs to build up inventory. Farmers are eager to sell, but they have no corn on hand.

In this situation, when new corn comes on the market, it is expected to sell at a high price. The expectation is a price of .9 yuan/jin (about $269/mt or $6.58 per bushel).

In Heihe, a major soybean-growing area in northern Heilongjiang, there are the usual complaints about foreign soybeans wiping out the industry. The local industry people say there is basically no room for profit for local soybean crushers. They say local soybean crushers are shut down most of the time and only use about 10% of production capacity.

We can see in the northeast how soybeans disrupt China's grain price strategy. The idea is to keep prices rising gradually year after year to stay ahead of cost increases and give farmers incentive to plant grain. This is what's happening with corn. However, soybean prices can't follow this path because imported soybeans don't rise in price every year. Thus, with corn prices rising and soybean prices tied down by competition from imports, farmers are abandoning soybeans.
Posted by dimsums at 8:14 PM