China is constructing a massive South-to-North water diversion project, a system of reservoirs and canals that will divert water from central China to the parched northern provinces. The official web site for the project is here.

Since there are people living just about everywhere in China, the hardest part about these projects is moving people who are in the way and finding another place to put them. The project will begin in northern Hubei and southern Henan where some 300,000 people will be moved and resettled. This is the second-largest resettlement after the Three Gorges dam. The dam required moving over 1 million people over 14 years. This time they will move fewer people, but in a shorter time period. 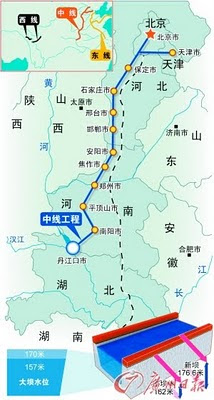 Above is a map of the middle route of the water diversion project begins in Hubei's Danjiangkou City, then passes through Henan and Hebei provinces to reach Beijing and Tianjin

Officials in Hubei and Henan Provinces have been hard at work making preparations to move the first batch of resettled families this month. A long article from the Guangzhou Daily describes how the first group from Danjiangkou were loaded on to a convoy of trucks and driven 5 hours west to the Xiangbei farm, a district near Xiangfan City in northwestern Hubei. This appears to be a state farm on reclaimed land. Families were dropped off at newly built houses with a vegetable patch. They are allocated about 1 mu of farmland per person. In Xiangbei the officials leveled and reclaimed land, dug canals, built roads and other infrastructure for the migrants. Teams 2, 3, and 4 of the Xiangbei farm invested over 30 million yuan in construction and added 277 mu of farmland for the 1077 households who were to be resettled there.

In the Qujialing management district of Jingmen, further to the south in Hubei, 1200 residents were resettled on 1800 mu at 5 different places. The allocation was 6 mu for a family of 4, plus a 0.2-mu vegetable plot.

One prospective migrant displaced by the Danjiangkou reservoir posted on an electronic bulletin board: "Can any friends from Xiangbei Farm tell me about the place? Does it have water?" [I assume he's not being ironic in asking this!]
A response came from a friendly netizen: "The area around Xiangbei generally doesn't lack water. There are just a few places where you can't grow rice."

It seems that many of the resettled migrants saw the place and kept going or never showed up. They stayed behind in their native city and found other work.
The prospective migrant's next question was: "How far is it to the city?" 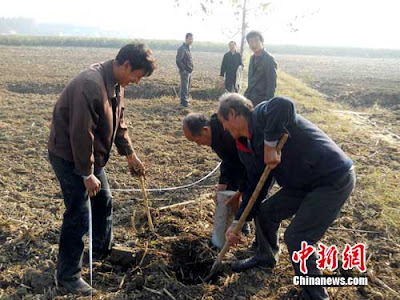 Families are also being resettled in Henan Province. A production cost report from Nanyang reported a 12-percent increase in land costs this year for wheat production. One of the reasons given was that land was distributed to resettled families from the water diversion project, reducing each family's allocation. This increased the demand for rented land. A large decline in labor cost was also reported, due to an increase in the number of laborers and lower wages in the area.
Posted by dimsums at 5:59 PM