An article in the Yangzhou Evening News last week reports that sows can be worth more dead than alive. According to a worker with the local insurance company, the company has lost money since it began offering subsidized insurance for breeding sows last year, because farmers are filing twice as many claims for dead sows as they did last year. 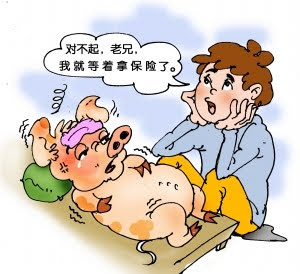 Because hog prices have been low, raising sows has been unprofitable. Thus, you spend more on the feed and upkeep of the animals than they generate in sales of baby pigs. They could slaughter them and sell the meat but the indemnity payment for a dead sow is more (1000 yuan).

There is a mixture of fraud and moral hazard (engaging in risky behavior because you know you're insured). The insurance worker reports that he has seen a lot of farmers neglecting to treat sows for disease in the hope they will die so the farmer can collect the insurance. He says there also have been people setting up hog farms in the suburbs that feed pigs swill from restaurants and keep them in filthy conditions "worse than a toilet." He says it would be strange if the sows didn't die in these conditions. In other cases, the farmer raises, say, 100 pigs, but only insured 50. The death rate then appears higher than it actually is.

The death rate for sows is double what it was last year. The company paid compensation for 1300 dead sows in the first five months of this year, up from 700 last year at the same time. In one county, farmers filed claims on 25% of the sows covered.

The insurance company is planning a door-to-door publicity campaign. In the process they hope to catch farmers who are cheating. Insurance will now be refused if farmers feed swill to their hogs. They've also started adjusting the indemnity payment according to the sow's weight.

Farmers can make out even better if they can sell the dead pig's carcass and claim the insurance benefit. Some netizens in Yangzhou reported small ads pasted on walls offering to buy dead pigs. The reported called two of them, both of which offered to buy a dead pig for 20-30 yuan, depending on weight. They claimed to feed the carcasses to fish, but the local fishery station claimed they had never heard of such a practice.
Posted by dimsums at 12:35 PM

Thanks a lot for sharing these facts with us. Can you please put some shade on how to get a life insurance policy. I shall be thankful to you.

Thank you so much as you have been willing to share information with us. We will forever admire all you have done here because you have made my work as easy as ABC. https://ibaohiem.vn/