Rice Affected by Flooding; Price Up

Heavy rains in central and south China are affecting this year's rice crop. An article from a rice investors report sponsored by Sinograin (China's grain reserve company) reported that heavy rains had caused flooding, inundating rice fields and causing pest infestations in major production regions of Hubei Province. According to one assessment, this year's rice production could be down 10%. In some areas, production may be down 20%. 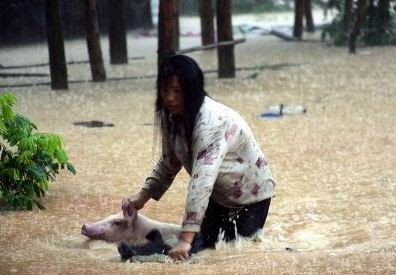 Infestations of insects (planthoppers and leaf rollers) have also hit the rice crop in Hubei. Even worse, pests are affecting grain stored in warehouses. Teams from the Hubei plant protection station were sent out to inspect the rice crop in 11 counties. Most rice fields were inundated with water, conditions that encourage sheath blight, rice blast and bacterial leaf blight.

The early-season rice harvest, about 7-15 days away, was also affected in Jiangxi and Anhui Provinces. This could also affect planting of the late-season crop, planted after the early rice harvest.

However, one rice analyst quoted in the article says that it's too soon to tell how this year's production will be affected. He says there was already an expansion of rice planted area this year, and some of the lost early-season crop might be replanted for fall harvest, offsetting some of the flooding losses. A Hubei official says they are starting a campaign to replant.