"Grain banks" are yet another interesting experiment going on under the radar in China's countryside. A "grain bank" is basically a warehouse where farmers deliver their grain after harvest. The farmer gets a passbook where his deposit is recorded. He can return to the bank and "withdraw" grain products like milled rice, flour, or cooking oil at any time and the value is deducted in the passbook.

The banks seem to have gotten started in 2006 and are still in the pilot stage in selected areas. A short note about grain banks in Henan appeared last week that kindled my interest. A google search turned up a detailed account of grain banks in Taicang city and Suzhou, another description of pilot programs in Shanxi and grain banks set up in Sichuan after the 2008 earthquake, and a description of a grain bank operated by the Beidahuang Co. in Heilongjiang (the descendent of a massive state farm set up to protect the Russian border in the 1960s). 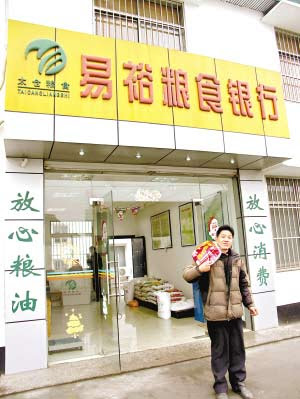 A major problem with storing grain in houses is loss due to mold, insects, and rats. Articles say the annual losses are 8%-10%, a national total of 15-20 million metric tons. The grain bank supposedly stores the grain in secure facilities and reduces waste. At least one grain bank dries grain.

Farmers don't have to store grain in their houses. In Taicang, Jiangsu Province, after "constructing a new countryside," farmers have moved into new homes (probably apartment buildings) where they don't have room to store sacks of grain.

Farmers don't get paid interest. The "grain bank" basically stores and processes it for free. In Taicang's Yiyu Grain Bank, you can withdraw milled rice equal to 69% of the weight of paddy rice you deposited (this is approximately the amount of milled rice you get from paddy rice) if you withdraw within 3 months. The ratio drops to 67% if you withdraw 3-6 months later and 65% after 7-12 months. You can also withdraw unmilled rice for a 2-fen storage fee and mill it yourself. 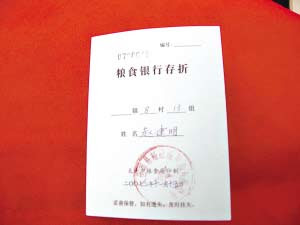 Old Chen in Taicang calculates if he held 100 jin of rice in his home, he would have 90 jin left after spoilage, then after milling he would get 63 jin of finished rice. If he keeps it in the bank, he can withdraw 65 jin. Moreover, his family can eat fresh rice, better quality than if he stored it at home.

Farmers can also withdraw their rice at a network of grain and oil shops around the city. They can redeem higher-quality rice, flour, cooking oil, or other products with their passbook balance.

In Taicang, the grain bank deals in rice for home consumption. Grain banks in Shanxi, Sichuan, Henan, and Heilongjiang they deal in commercial grain as well. The Heilongjiang operation works with an actual bank (Minsheng) to give operating loans to farmers secured by the grain.

What's in it for the bank? The article about the Taicang bank spins a story about a grain company employee named Mr. Zhou who worried about wasted grain and thought up the idea many years ago.

The article about grain banks in Shanxi explains the real story. "Grain banks" are actually a scheme designed by the grain bureau. The grain banks are set up by the shaky companies that were spun off from grain bureaus when the market was "opened" in 2004.

Newly privatized grain companies were having trouble getting loans. Cash flow problems prevented them from buying enough grain to keep their warehouses full and to keep their mills running. The "grain bank" apparently shifts the cash flow problem on to the farmer. The farmer delivers the grain to the "bank" and gets an entry in his passbook instead of cash. The "grain bank," a front for a trading or milling company, doesn't have to pay out any cash to get grain in its possession.

It's not clear whether the grain bank actually stores all the grain deposited, or if it employs a type of fractional-reserve banking. Does it get the grain and sell it for cash, and then buy back grain as needed when farmers come to withdraw? Mr. Zhou in Taicang says farmers don't have to worry as long as the bank keeps the grain in storage, but "...if it’s sold there is more trouble."

Some experts worry that this could be a problem waiting to happen. What if "grain banks" are caught by an unexpected price movement that leaves them unable to buy enough grain to meet withdrawals?

Why does the government like it? It reduces waste of grain and improves "grain security." They probably like it because it's easier to know where the grain is if it's in warehouses than if it's stored in farmers' houses (at least, in theory).

This is another innovation that at first glance looks like a great market innovation. Is it a step toward the commodification of grain and getting farmers accustomed to hedging and other financial transactions? Or is it a throwback to the old-style grain stations of the planned economy?
Posted by dimsums at 7:01 PM