During the summer months there have been a series of incidents where Chinese buses burst into flame. I first noticed this in a story from Beijing last month and saw another story from Tianjin today. Last year, a burning bus killed 24 people and injured 19 in Chengdu. A goole search shows reports of incidents all over the country, including a video of one in Shanghai. One article explains that overloaded buses can overheat in the summer. 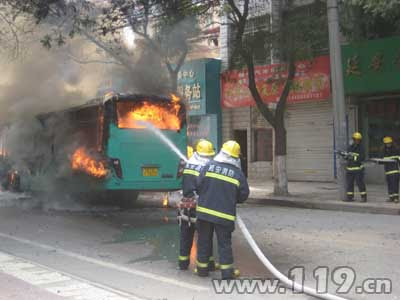 Bus that caught on fire in Yan'an, Shaanxi Province, July 14

The problem is not confined to buses. Last month I saw a photo of a passenger car that had burst into flame in Beijing. The news article gave few details (such as what happened to the people in the car) and advised readers to keep their cars maintained in the summer months.

This has nothing to do with the topic of this blog but it's a reminder of potential quality problems as China gears up to export vehicles to the world.
Posted by dimsums at 12:50 PM