A Ministry of Agriculture seminar on "low carbon agriculture" held in Beijing on June 18 painted a scary scenario of diseases, pest infestations, water shortages, and desertification disasters. They warn that agriculture is not only a source of greenhouse gas emissions but is also one of the most vulnerable industries to climate change. According to the report, "If measures are not taken, crop production could be reduced by 5%-10% by 2030." 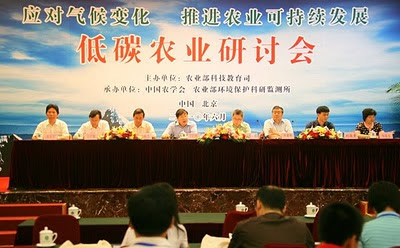 According to experts, China faces a "grim, heavy task" to reduce greenhouse emissions and move to a more sustainable development path while facing pressures to reduce poverty and develop the economy. Typically, the conference raised a wide-ranging menu of tasks and objectives. They plan to reduce greenhouse gas emissions from agriculture, increase carbon sequestration, switch from fossil to renewable energy, improve irrigation, overhaul crop-breeding. They want to reduce methane and nitrous oxide emissions from livestock, get farmers to use energy-saving stoves and kangs (heated beds), take animals off pastures to reduce overgrazing, build fermentation tanks to produce cooking and heating gas from animal manure, use more crop straw for energy, build small hydroelectric facilities, and build irrigation infrastructure.

Chinese agricultural officials may secretly be extremely pleased that they have a great excuse to rev up their central planning machine and roll out dozens of programs designed to re-engineer agriculture, build things, and push small farmers out of agriculture in favor of big, easily-controlled companies. It will require massive intervention, thousands of subsidy payments and demonstration programs, and support for companies to achieve the wide-ranging objectives they have set up.

Many of the problems they are trying to address do not result from climate change. China had floods, droughts, and other natural disasters long before anyone dreamed up "climate change." Most of the problems are the result of trying to produce too much on a skimpy resource base. Yet the report on the seminar adds the more important "party line" that we must not neglect to "stabilize planted area of grain" [which means don't let farmers reduce grain plantings] and "raise the general production capacity for grain."
Posted by dimsums at 5:48 PM