Storing Up Garlic, or Not?

Last week, the chief economist of the National Bureau of Statistics claimed there was no evidence that "hot money" was flowing into markets for agricultural commodities like garlic. One of his points was that garlic is sold as a fresh good that couldn't be stored.

Recent news articles probing the situation show that the garlic market is highly competitive, surprisingly sophisticated and capital-intensive. Actually, after garlic is harvested much of it is purchased by dealers who place it in temperature-controlled warehouses. The garlic is held until the peak consumption season during the mid-autumn and spring festivals. During the fall and winter months, all the garlic in the retail market comes from such warehouses. An article about Cangshan County in Shandong Province, one of the leading garlic-producing areas, reports that the area has 180,000 metric tons of storage space and 20,000 mt of space was added this year. 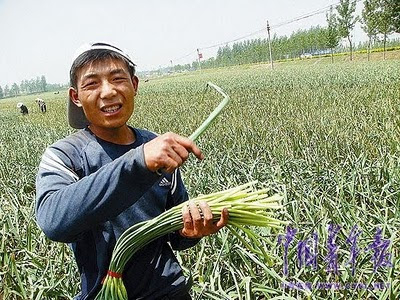 Merchants can only make money if the price goes up between the harvest and the fall-winter sale period. If the price goes down, they lose not only the difference between their purchase and sale prices, they also lose warehouse fees, transportation, and interest on bank loans. The fixed cost of garlic storing is said to be at least 0.7 yuan, including electricity, labor, repairs, bags, medicine and other costs. Moreover garlic usually has 8% spoilage losses.

Interviews with merchants say that many are wary of stocking up on garlic since the price is unusually high. One merchant said last year he stored up 50,000 yuan of garlic but this year: “high price high risk, if the price falls, I don’t want to be holding inventories, who can bear the losses?” He says you can easily lose 100,000 yuan.

A lot of capital is needed for this business. Articles say banks are not willing to give loans because the business is too risky, so merchants have to get loans through informal channels (minjian daikuan)--"hot money" perhaps? One garlic merchant said, "No one knows how much capital is coming into the garlic market." He likens the current garlic business to the stock market where share prices can soar or plummet without warning. Another compares it to the real estate market.

One article describes the situation in Cangshan as the harvest comes out of the field. The road is said to be crowded with merchants from the local area as well as other parts of Shandong looking to buy garlic. This year cold weather reduced the harvest, and it is said that a panic-buying mentality has set in. Merchants are checking websites and calling around to learn the garlic price in various places. Competition among buyers has sent the price up to a record of 3.6 yuan/jin (roughly $.50/lb) in Cangshan.

At a retail vegetable market in Jinan, a reporter found that garlic sales were slow due to the high price. Only one vendor offered garlic; a few customers came by his stand but kept moving when they heard the price. A vendor named Gao said he's not stocking garlic because he's afraid it won't sell. He notes that garlic is now more expensive than eggs.

In past years, the price often fell dramatically as the new harvest came on the market. One farmer recalled a year when the price was 2.3 yuan before the harvest, but it had gone down to 0.3 yuan when he was ready to sell his garlic. The price doesn't move as dramatically now, but there is strong possibility that it will fall. In one production area it is estimated that only about one-fourth of the usual amount is being held in inventory.

However, if inventories are down by that much, the lack of warehouse supplies in the fall and winter months may keep the price at a high level throughout the year.

Low prices in 2007 and 2008 discouraged farmers from planting garlic. In 2008, it is said that you could trade a sack of garlic for a pack of cigarettes in Henan Province. A 30% drop in plantings led to a rising price in 2009. This year planted area was up, but poor weather reduced yields by as much as 40%.

China is also the leading exporter of garlic. It accounts for 70% of world production and exports about 1.5 million metric tons annually. Most garlic consumed in the United States comes from China. High prices have not cut into exports. Earlier this year, exports were running 10% ahead of last year. Moreover, the price of exports is 20 yuan/jin, about four times the domestic price.

Despite China's dominant position in the world market, one article quotes an industry representative who complains about foreign countries' "green barriers" to exports. He calls for preferential policies for garlic and government reserve-holding. Another laments that China doesn't add enough value to its garlic. It is said that some garlic is exported, processed into tablets and sold back to China.
Posted by dimsums at 8:15 PM