On May 19, Chinese officials announced plans to create new farmland and clean up environmental problems in villages. Each program will set up model provinces with billions of dollars of investment shared by the central and provincial governments. Exactly what these programs entail was not revealed, but they involve spending over $10 billion combined. 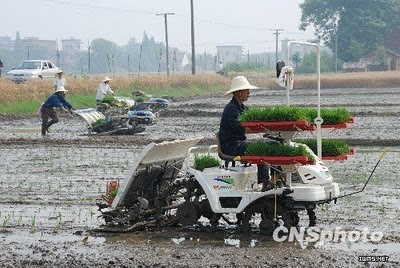 On May 19, Chinese officials announced a program for creating new farmland that is expected to increase grain production capacity. Investment of 56 billion yuan will be made in ten model provinces, including Hebei, Inner Mongolia, Heilongjiang, Jilin, Jiangsu, and Anhui. The central government will allocated 26 billion yuan and provinces are expected to kick in the other 30 billion yuan. It is expected that 10 million mu of new cultivated land will be created, yielding 20 billion jin of grain. This program is intended to help keep cultivated land area above the 1.8 billion mu "red line." No clues as to where this new land will be found.

In 2008, organization was started in western Jilin, Xinjiang, the three-rivers plain in Heilongjiang, and the Wenchuan region that was hit by the earthquake.

Minister of Finance Zhang Xiaochun announced that the Ministry will spend 12 billion yuan over the next three years for rural environmental comprehensive remediation. An article describing Jiangsu's participation reveals that the project will be concentrated in its two problems areas: the Taihu Lake area and the Huai River watershed. The central government will spend 850 million yuan and Jiangsu will spend no less than 1.275 billion yuan to construct "rural environmentalal infrastructure."