China has been pumping vast amounts of money into its economy since last year. It's believed that a lot that "stimulus" money went into real estate and stock market speculation. The government moved to clamp down on these markets, and now investors are looking around for other place to stash the cash. Is it going into commodities?

The Chinese leadership has become alarmed about the possibility that "hot money" is inflating new bubbles in unusual places like markets for garlic, mung beans, and medicinal herbs. Vegetable prices have long been incredibly low, but it is pointed out that now garlic is more expensive than pork. 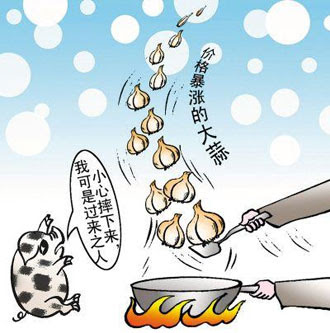 In this comic, cloves of garlic are soaring toward the sky, and the pig warns, "I've just been there and it's a hard fall on the way down." This is warning that sky-high garlic prices will eventually fall, just as pork prices did in 2009 after reaching a record high in 2008.

On May 22, the chief economist of the National Bureau of Statistics reported there is "no evidence" that hot money is causing the increase in vegetable prices. He claimed that investors can't invest in vegetables since they're consumed fresh and can't be stored. According to him, the rising prices are due to unusual weather--drought in the southwestern provinces and low temperatures in eastern China. As summer vegetables come on the market, prices will come back down.

However, on the same day the National Development and Reform Commission (NDRC) sounded the alarm on "hot money," and directed local price bureaus to crack down on speculative behavior, including malicious hoarding, spreading false information about prices, collusive behavior, and efforts to corner the market. One official linked the flow of money into markets with the cooling of the property market and depressed stock market. He said supply and demand are in tight balance and vulnerable to speculation.

The central leadership's response is to fall back on its central planning instincts: gather vast amounts of information and use vaguely-defined criteria to identify and crack down on price criminals. The NDRC has directed local price bureaus to strengthen their monitoring of prices and set up "early warning systems." When they detect abnormal situations they are to promptly report them up the chain to higher authorities. Information should be collected on commodity supply, demand, production costs, value-added in distribution, inventory changes, and "firmly prevent 'hot money' speculation."