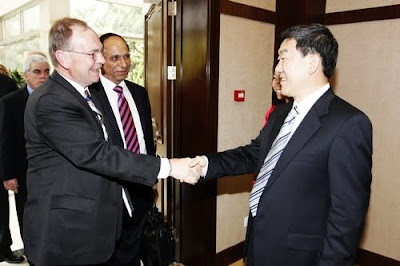 Niu noted that China-US agricultural trade has grown rapidly this year, but there are still "serious imbalances." China has a big deficit, and he said the U.S. should open its agricultural market to more Chinese products. He specifically raised problems with poultry, aquaculture, fruit, and bonsai trees.

Niu complained that the U.S. had promised to solve the problem of Chinese poultry meat access, but there has still be no substantive trade. According to Niu, "The Chinese side adheres to the WTO animal health organization regionalization principle and places import restrictions on products from some U.S. regions where avian influenza outbreaks have occurred, but the U.S. continues to prohibit all poultry meat from China." Niu also brought up discriminatory “automatic detention” [by FDA] of Chinese aquaproducts, and he noted that Chinese horticultural product exports to the U.S. have been under negotiation for over 10 years, but there is still no resolution.

In response to the U.S. side's inquiries about problems with pork and poultry exports to China, Niu stressed that China-US agricultural trade problems must adhere to scientific standards and principles. U.S. pork to Europe must be free of ractopamine, so China should have the same requirement. Niu complained that China has given the U.S. more than 10 avian influenza virus strains, but the U.S. has not supplied any low pathogenic avian influenza virus strains.

The Chinese MOA is paying a lot of attention to problems and hopes the U.S. side can set a timetable and roadmap to lift these restrictions on Chinese agricultural exports to the U.S.

Undersecretary Miller appreciated the concerns raised by Vice Minister Niu and said USDA would work on these issues and make progress on Chinese poultry meat, Ya pears, and bonsais.
Posted by dimsums at 3:02 PM