In December 2019 China's Ministry of Agriculture and Rural Affairs issued a circular calling for normal pork production capacity to be restored by the end of 2020 and normal pork supplies by 2021. The statistics issued by China's National Bureau of Statistics (NBS) last week indicate good progress. Trouble is, the increase in productivity implied by the statistics is implausible.

We'll set aside NBS's conservative 29-percent decline in swine inventory between Q3 2018 and Q3 2019 during the peak of the African swine fever (ASF) epidemic. Agriculture Ministry data indicated that the swine population plummeted by more than 40 percent during the epidemic, and the decline in sow numbers was even faster.

In a report on "sustained recovery of livestock production" issued by NBS with Q1 macroeconomic data touted six straight quarters of swine inventory growth. The report said the pork industry increased the inventory of swine on farms to 416 million head at the end of Q1 2021, up 95 million from a year earlier and very close to the inventory level before the African Swine fever epidemic. The number of hogs slaughtered was 171.4 million in Q1 2021, up 40 million from a year earlier.

NBS reported that China had 42.2 million productive sows at the end of Q1 2021, up from 34 million at the end of Q1 2020. The 34 million sows on farms a year ago managed to produce 567 million slaughtered hogs over the last 12 months (according to quarterly reports) and enough offspring to increase the inventory on farms by 95 million head between Q1 2020 and Q1 2021. If we assume that half of the sows have to be culled and replaced during 12 months, an additional 17 million gilts would have had to be produced as replacements. Those numbers imply 689 million hogs and pigs were produced over the last 12 months . That, in turn, suggests that last year's 34 million sows produced an average of 20 offspring in 12 months. At two litters per year, that works out to 10 surviving pigs per litter--pretty good performance...if the numbers are true. 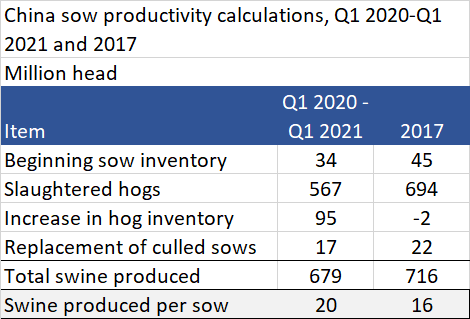 For reference, let's do a similar calculation for 2017--the last full year before ASF hit. That year China started with 45 million sows. They produced 694 million slaughtered hogs over the following 12 months, but the swine inventory was almost unchanged--it declined by 2 million that year. Again, assuming half the sows needed to be replaced, 22 million gilts would have been needed as replacements. Thus, the total production in 2017 was about 716 million head, equal to 16 surviving pigs per sow, or 8 per litter.
So the calculations imply that the average sow produced 20 surviving offspring during the last 12 months of swine herd rebuilding, up from 16 per sow produced during 2017. That is a 25-percent increase in sow productivity.
This increase in productivity is exactly the opposite of what has been reported about China's swine industry over the past year-plus. All indications are that sow productivity has gone down, not up.
The productivity and nearly full recovery of swine numbers--including a sow inventory of 43.2 million at the end of Q1 2021--is inconsistent with the sustained high price of piglets. If sows are really turning out piglets at the pace implied by the NBS data, why are piglet prices still so high? In March 2021 Agriculture Ministry data showed that piglet prices averaged 93.37 yuan per kg. That was down from the peak of 108.2 yuan in August 2020, but still more than four-fold higher than the piglet price in early 2019. Swine carcass prices dropped from 53.74 yuan per kg in January to 40.70 yuan in April. Why are piglet prices and slaughtered hog prices moving in opposite directions? Other reports attribute the recent fall in hog prices to a rush of panic slaughter of small pigs below normal slaughter weights prompted by ASF fears. 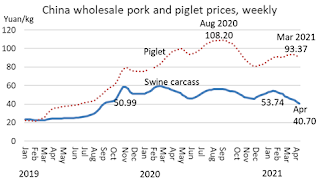 If pork supplies are really recovering so well, why have imports risen? China's customs data reports that 1.16 million metric tons of pork were imported in Q1 2021, 22 percent more than a year earlier. This is another piece of data at odds with the reported recovery of pork supplies.
If pork supplies have been growing since last year, why is the government continuing to dump frozen meat into the market to boost supplies? The commodity reserve management center injected 200,000 metric tons of frozen pork reserves into the market during Q1 2021, slightly less than 250,000 mt of pork reserves sold in Q1 2020 when the pork shortage was at its peak.
These numbers appear to have some fat baked into them somewhere.
Posted by dimsums at 9:10 PM

Retail pork prices have declined every month for the past 5 months. So there's that.