While propaganda trumpets a  "faster than expected" rebound in China's swine sector, disease and productivity problems raise concerns about the health of the industry. A surge of live swine imports in the fourth quarter of 2020 suggests that the restoration of the breeding system is still in its early stages.

China's agriculture ministry web site posted an interview with a pork industry analyst assuring consumers that plenty of pork would be available for the spring festival holiday. The analyst recited statistics about inventories recovering to over 90 percent of their level in 2017, rising pork output since last October, and falling prices. Provincial and local governments also publicized reports about increases in production. Releases of government pork reserves were also publicized ahead of the holiday. Chinese officials appear to be concerned about a surge in food prices that accounted for most of the increase in the January CPI.

Under the radar, other reports were less effusive about the state of the swine industry.

A Futures Daily report said that the sow inventory had fallen in January for the first time in 13 months and warned that the swine industry is still under threat from African swine fever. Futures Daily said sows are being retired faster than usual due to ASF outbreaks and their low productivity. Their short productive period means that a larger number of sows have to maintained and fed to achieve a particular level of hog slaughter, raising costs, lowering productivity, and keeping pork supplies tight.

An early February weekly report from Shandong Province's animal husbandry station agreed that piglet prices are high due to a shortage of "parent generation" sows. The report said scarcity is raising the price of the limited supply of high-quality piglets available. The higher price for piglets means higher production costs for finished hogs.

China's pig breeding system was decimated by the ASF epidemic in 2019, according to another report posted in early February. Many core breeding farms stopped reporting data to the national genetic improvement program, and others only reported sporadically during the height of the epidemic. According to the report, the retention of low-quality commercial-generation sows rebuilt the herd rapidly and maximized economic returns, but it set back the national breeding program by abandoning the cycle of breeding commercial swine from purebred grandparents and parent generation propagation herds. Breeding farms started getting back to business as usual in 2020.

The breeding disruption undermines one of the strategic objectives set for China's agriculture this year: weaning the Chinese swine industry from its reliance on imported breeding stock. 21st Century Business Herald reported that 80 percent of China's pork relies on a steady of flow of an average of 2,100 imported purebred stock each year. The basic breeding stock has to be constantly replenished because genetics degrade from generation to generation. The report said 20,000 breeding pigs were imported in 2020, ten times the usual number.

Customs data show that imports of live swine resumed last year after being shut down during the ASF pandemic from mid-2018 through 2019. Data also show that most of last year's live pig imports came in the fourth quarter. Thus, breeding farms have ramped up their restocking in the last three months, and it will take most of 2021 to re-establish the normal pattern of core breeding farms supplying parent generation stock to multiplier farms which, in turn, supply high-quality piglets for commercial fattening. 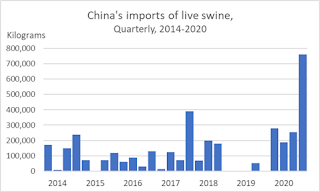 A report in Beijing Commercial News points to problems facing the Chinese swine industry that have become acute with this year's especially cold "La Nina" winter. Chinese agricultural officials banned antibiotics in feed last year, which slowed weight gain and also made pigs more vulnerable to diarrhea and respiratory diseases during this year's cold weather, according to a farmer in Jiangxi Province interviewed by the paper. Farmers are investing in heating systems for pig barns. A veterinarian calculates that slower weight gain from the antibiotic ban reduces pig farmers' profits by 50-60 yuan per pig. Farmers are also experiencing higher costs from record-high corn prices and an increase in soybean meal prices.

The Shandong animal husbandry station also warns the industry to be on guard against resurgence of ASF and piglet diarrhea as threats to the rebuilding of the swine herd.

A new ASF threat was revealed by New Hope-Liuhe, one of China's largest feed suppliers and pig/poultry producers. The company acknowledged that 1000 of its sows had been infected with ASF. Some of the company's contracting finishing farmers also had infections in their herds. The ASF strain had one or two deleted genes that matched the strain used in a vaccine developed at a veterinary research institute in Harbin. The virus detected in New Hope's herd is definitely man-made, one official said. The Harbin vaccine is still in trials and has not been approved for commercial use. The infections were believed to be the result of injections with an illegally sold pirated vaccine replicated from published research materials. The infections in New Hope's herd were not as lethal as the naturally-occurring ASF virus, but the attenuated virus can have chronic effects such as reduced litter size. The infected animals were culled to prevent the virus from spreading.

As usual, China is only reporting a small fraction of its ASF outbreaks. China's agricultural ministry reported one ASF outbreak in January and one more in February. Meanwhile its officials have banned all German pork over outbreaks in wild boar there and are demanding detailed information about the German infections.