China subsidizes production and storage of wheat and rice stockpiles to preserve "food security" for humans, but inedible grain reserves are being auctioned to deflate a bull market for animal feeds.

An article by China Grain Net reported this week that adjustments to opening bids in grain auctions reveal officials' determination to dispose of surplus wheat and rice purchased from 2014 to 2019 under the country's price support program. According to the article, less than 50 million metric tons (mmt) of surplus wheat remains to be sold after a string of auctions held since last year. Over 100 mmt of surplus rice--mostly medium grain--is targeted for disgorgement from bloated reserves. China Grain Net is a grain market news service operated by Sinograin, China's Grain Reserve Corporation.

The article focuses on the "huge effect" of an April 12 circular that raised the opening bid price for the wheat auctions by 60 yuan per metric ton. This move was interpreted by China Grain Net as sending a signal to boost the price for the new wheat crop that will begin harvest next month.

The first wheat auction held after the adjustment brought a higher average price, but only 10 percent of the wheat offered actually sold. The April 14 wheat auction had an average sale price of 2401 yuan ($369) per metric ton, 52 yuan higher than the previous auction. However, only 410,000 mt of the 4 mmt offered actually sold. The poor auction results are due to the so-so state of the flour-milling business with potential buyers said to be waiting for the new wheat crop to come on the market.

Current market prices for wheat and rice prices in China are above their relatively low level a year ago when China was emerging from its pandemic lockdown. According to the National Bureau of Statistics, the average wheat price jumped to 2565 yuan/mt in mid-January--165 yuan above year-earlier price--when wheat auctions were selling 100% of grain offered. In early April the Bureau's average price was down to 2535 yuan. Wheat prices typically drop during June when the new harvest comes in. 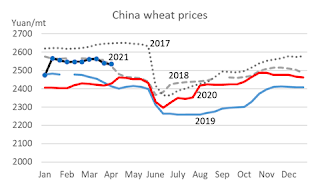 Japonica (medium grain) rice prices have been higher than last year, but prices are still below 2018 and 2019 levels. A surge of rice-hoarding in April of last year caused a surge in medium grain rice prices as China emerged from lockdown. The average price reported by the statistics Bureau in early April 2021 was 4060 yuan ($640) per metric ton. China Grain Net worries that lower auction prices could put pressure on the medium grain price in the currently sluggish market. The price plunged as low as 3834 yuan in 2019. 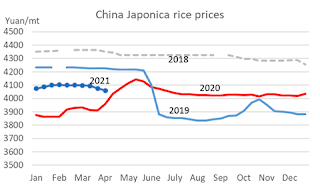 China Grain Net says the plan is to diversify the grain market, i.e. wean the grain market off reliance on selling at the minimum price to state reserves. They expect that minimum-price purchases will not be launched until late in the wheat marketing season this year. But they've been saying this since reforms that "opened" the grain market in 2001 and 1993. China Grain Net says grain business operators complain that the minimum price purchase policy distorts the grain market, but they nevertheless like the policy's reduction in price risk.
China Grain Net said the increase in wheat auction prices could affect the corn market by reducing the price advantage of wheat over corn in animal feed rations.
There was no mention of prospects for corn auctions which typically run from May to August after the corn marketing season is completed. Supposedly, the surplus of "temporary reserve" corn stockpiles was depleted by last year's auctions.
Posted by dimsums at 9:26 AM

Thank you for sharing this wonderful blog with us.This is really helpful and informative blog. keep sharing these kinds of blogs.