China is learning that not all soybeans are equal and you have to pay a premium if you want to consume and produce "non-GMO" products. China's shortage of non-GMO soybeans was one of the main topics of discussion at a meeting on the soybean market held by the Ministry of Agriculture during December 2015 in Heilongjiang Province. The area planted in non-GMO soybeans in China has been shrinking year by year while the demand for non-GMO cooking oil, food products, and protein supplements has grown. Meanwhile, the price of imported soybeans--which are predominantly genetically-modified--has been falling. 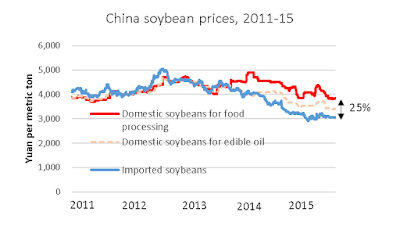 According to data from the National Grain and Oils Information Center, the price gap between Chinese soybeans for food processing and imported soybeans grew to 1000 yuan per metric ton in mid-2015. The gap narrowed after domestic beans came on the market in the fall, but there is still a roughly 25-percent gap in price. This is a big change from past years when prices were comparable between the two types of beans.

Until recent years, China thought of soybeans and other farm products as generic commodities, but now there are distinct segments in the soybean industry. The dominant portion consists of processing soybeans to make cooking oil which now utilizes imported soybeans almost exclusively. Several smaller segments require use of non-GMO soybeans as raw material: non-GMO cooking oil, food products like tofu, and soybean protein used as ingredients for other foods or nutritional supplements.

China's soybean imports soared to 81.7 million metric tons during the calendar year 2015, a number that China's Economic Daily called a challenge to the country's "protein security." The import volume was up 10.3 million metric tons, despite a slowing economy.

China's own soybean production is shrinking. At the December soybean conference it was estimated that domestic soybean output was about 10 million metric tons in 2015, down 2 mmt from the previous year. Reportedly, some farmers in Hunan Province have switched from cotton to soybeans as cotton prices plunged, but production in northern regions has been declining as farmers switched to corn and rice. A new plan aims to focus on building up a "green" soybean production base in Inner Mongolia in coming years. At the meeting other northeastern provinces cried out for government aid to supply farmers with seeds, to build irrigation facilities, and give support to Heilongjiang's "weak" soybean processing industry.

Falling international prices make it hard for Chinese non-GMO soybeans to command a premium. Despite tight supplies of domestic Chinese beans, their price has been falling, just not as fast as the price of imported soybeans. At the soybean industry conference it was estimated that the food processing industry needs about 10 mmt of soybeans annually, of which an estimated 3 mmt of imported GMO soybeans are used surreptitiously by food processors and the volume was said to be growing steadily. This substitution of cheaper imported beans--called an "open secret" over two years ago--was said to be a chief reason why domestic non-GMO soybeans cannot command a sufficient premium to bring forth a greater supply.

At the industry conference it was said that the soybean-based protein supplement industry has very strict standards that prohibit use of GMO soybeans--because a large portion of their products are exported. GMO soybeans are reportedly easy to obtain at soybean wholesale markets in southern coastal regions. Some operators imported far more soybeans than they could use in order to get letters of credit which they lent out short-term at high interest rates on the gray market. They dumped their excess beans in wholesale markets, contributing to the leakage of imported soybeans into the food processing industry. 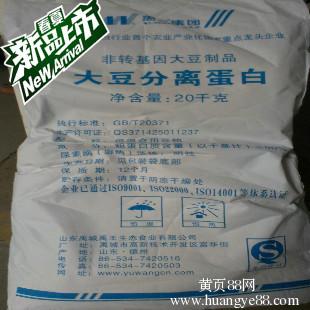 Four years ago, the Ministry of Agriculture held a meeting to hail China's soybean industry as a global supplier of non-GMO soybeans and protein products. Exports of soybeans and protein products were booming by 2013, but now they are being undermined by the shortfall. Customs statistics through November 2015 show that China's export volume of soybeans--used for food products in the U.S., Japan, and elsewhere--fell to 121,700 metric tons, down 38 percent from the same period in 2014. China's exports of protein concentrate products totaled 94,000 mt, down 22 percent.

Meanwhile,customs statistics show that imports of soybeans from Russia--non-GMO beans grown by Chinese farmers over the border--were up to 320,000 metric tons during January-November 2015, a ten-fold increase from the same period in 2014. The average unit value of the Russian beans was reported at $364 per metric ton--or about 2330 yuan--while imported South American soybeans averaged $425 and U.S. beans averaged $453. The low Russian prices are due to the collapse of the Ruble.
Posted by dimsums at 10:56 AM

Genuinely loved this kind of post. Although I want much more information on like precious subject matter.

i impressed by the quality of information on this website. there are a lot of good resource here. i am sure i will visit this place again soon.