Are China's hog producers rebuilding their herds after a two-year decline, or is the industry still in the doldrums? Two different statistics issued by Chinese government agencies provide conflicting answers. You can pick the statistic that fits your point of view.

Most market analysts follow monthly reports on changes in hog inventories issued by China's Ministry of Agriculture (MOA) which indicate a suspiciously constant number of hogs on farms throughout 2015 following a sharp drop late in 2014. 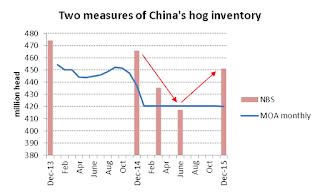 An "official" hog inventory number buried in the National Bureau of Statistics GDP report this week reveals an expansion of 30 million head during the second half of 2015. This follows a 50-million head decline in hog numbers during the first half of 2015. One would have to dig out the numbers from obscure quarterly reports (the hog number was omitted from the third quarter report) in order to discover this apparent bounce in hog numbers. The trajectory of hog numbers has important implications both for the supply of pork and its price during the upcoming peak-consumption season at the Chinese new year as well as the demand for feed.

Should authorities sell some of their frozen pork stockpile during the holidays, or are farmers gearing up to supply hogs during the peak consumption season? Will barns be too depleted of hogs after the holidays to absorb the supply of soybean meal and corn?

There are even bigger discrepancies in measures of pork output. NBS reported that 708 million hogs were slaughtered during 2015, but the Ministry of Agriculture's (this was issued by the Ministry of Commerce until two years ago) monthly report reveals that only 214 million hogs were slaughtered in "above scale" plants during the year. The NBS number of hogs slaughtered has consistently been over three times the "above-scale" slaughter number, and this year the discrepancy widened. If the two slaughter numbers are accurate, it means that the proportion of hogs slaughtered in large, sanitary slaughter plants is actually declining despite crackdowns and withdrawal of licenses of small slaughter facilities over the last few years. 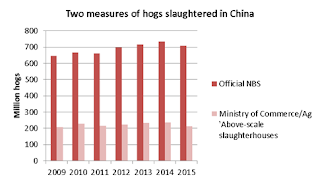 The two slaughter statistics tend to move in the same direction each year, but the NBS number tends to be more optimistic. This year the change in hogs slaughtered was similar for the two statistical series for the first time since 2010, but the percentages differ. The NBS reported a 3.7-percent decline in slaughter, but the slaughterhouse statistics imply a 9-percent decline. 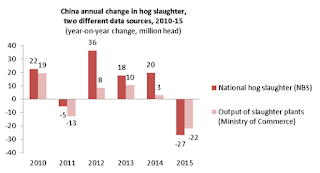 The bottom line is that we really can't discern much about the current trend in China's hog market from these statistics. Nor is there any way to evaluate the quality of these statistics since there is no detailed documentation explaining the methods and samples.

The fog created by conflicting statistics is ironic because a 2009 program to stabilize the hog market called for issuing a whole series of statistics--including the inventory and slaughter numbers--to inform hog producers so they could make better decisions about expanding or contracting their herds. The statistics are reported on an official government web site, but producers seem to still be in the dark about market conditions. The program did not stop an excessive build-up of inventories in 2012 that was followed by a two-year liquidation of sows that may be still underway.

The inept statistical work further reveals the futility of Chinese leaders' attempts to improve on free markets by tinkering with stockpiles and other interventions designed to stabilize prices. The 2009 regulation for stabilizing the hog market called for buying up pork during periods of depressed prices and selling it during periods of short supply. Successful market-tinkering like this presumes that government planners have superior information and foresight based on timely and accurate statistics on supply and demand, but their statistics actually shed little light on the situation. How can planners in a Beijing office building have a better feel for the market than the people who are in the market buying and selling on a daily basis?

Don't plan on conducting your own survey, because the government will probably arrest you for creating "confusion" in the market by providing an alternative to its official statistics.
Posted by dimsums at 10:25 PM

Hi! Very interesting post! Where I can find the statistics? I can't find them at the MOA page