China imported farm commodities at a robust pace during 2015 as Chinese buyers took advantage of bargains on the international market. With imported commodities as much as 40-percent cheaper than Chinese commodities, mills and processors are eager to buy imports even though Chinese markets are swimming in excess supply.

Customs statistics for January through November 2015 reported by China's Ministry of Agriculture show that the volume of imports of most major commodities increased by double-digit percentages last year. Cereal grain imports for the first 11 months of 2015 totaled 30 million metric tons (mmt), 79-percent more than the same period in 2014. However, the value of those imports increased only 49 percent because prices fell. 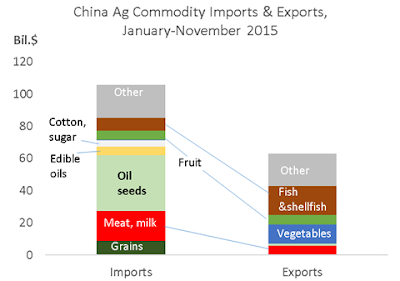 Cotton imports were down 36 percent as domestic prices fell and import quotas were cut last year. However, textile companies imported yarn which is not restricted by a quota. Imports of yarn increased 19 percent.

Overall agricultural imports totaled $105.8 billion, but the value was down 5 percent from the year before--again due to lower prices in 2015. That total is roughly equal to 10 percent of the value-added of China's domestic agricultural output. Agricultural exports were about $63 billion and were down about 7 percent. The net trade deficit was $43 billion. The numbers for the full calendar year will be somewhat larger after December data comes in.

Meanwhile, the Chinese government is holding large stocks of most commodities. The government is unable to offload the inventories because market prices have fallen below the acquisition prices and authorities are not allowed to sell at a loss.

In summary, China is actually sopping up excess demand in most global commodity markets--with a few prominent exceptions--by importing while also holding massive inventories. Global prices would be even lower if China were to dump its inventories and stop importing. The drop in cotton and dairy imports reflects a draw-down of inventories for those commodities. However, China is still accumulating corn and rice inventories. Chinese authorities don't want to see lower ag prices because maintaining farmer income growth is a big priority.

Can the table at the bottom be right? Corn imports doubled between '14 and '15?

I am really impressed along with your writing skills and also with the format on your blog.
import from china