China's Grain Stockpile Gets Out of Hand

China's top rural policy advisor estimated that China has 500 million metric tons of grain reserves. Chen Xiwen made the estimate at a January 10, 2016 economic outlook meeting held by the State Council.
[errata, Jan 26: After reading the speech carefully, dimsums has discovered that news media misinterpreted Chen's speech. He said grain inventories are at a record but did not give an inventory number.]

The director of China's grain bureau acknowledged that grain reserves are at a record level which he describes as "unreasonable."  He said southern rice storage is full, northeastern inventories remain at a high level, and there is a clear surplus of corn and rice. Grain purchase and storage will face "unprecedented conflicts" during 2016, the grain bureau director said. More storage space will be built, private storage will be rented, inventories will be released through various channels, and inventories will be shifted from one province to another. The director called for sticking to market-oriented reform, warning that going back to old approaches would make it "hard to cross the threshold" and give China a greater test.

Heilongjiang Province alone claims to have over 100 million tons of grain in storage--mostly corn and rice. But this is portrayed as a good thing because farmers like selling their grain to facilities with modern warehouses, fancy testing equipment, and a room where farmers can take a nap.

Noting that China imported about 120 million metric tons (mmt) of grain and soybeans during 2015, Chen Xiwen complained that the structure of the country's crop supply is not aligned with demand. Chen acknowledged that China boosted prices above global prices from 2008 until now in order to increase the income of farmers. He says this was necessary because otherwise China could not have narrowed the gap between urban and rural income and there was no other way for farmers to get higher incomes. 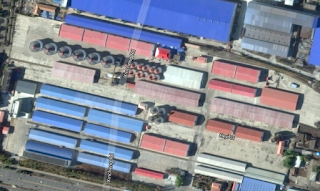 View of granary in Heilongjiang Province from Google earth.

To illustrate the perversity of China's grain and oilseed market, Chen would have done better to compare the 120-mmt import number with the 175 mmt of grain China's grain reserve corporation reported purchasing for policy purposes during 2015. This was a record volume and roughly a fourth of all grain produced in China. Only 18.5 mmt of grain was successfully auctioned off from reserves during the year, and 3 mmt was shifted from one province to another. This follows purchases of 123 mmt during 2014. Facing a lack of space, Sinograin has built 11.5 mmt of new storage space with 16.8 billion yuan (about $2.6 billion) of investment from the government. Chinese authorities are cramming a fourth of the country's own grain harvest into warehouses while the country simultaneously imports huge amounts of grain and oilseeds from the international market.

China may have nearly a year's corn supply in storage, according an analysis by China's Grain and Oils News. Based on data from Sinograin, China's grain reserve corporation, there was 152 million metric tons (mmt) of corn remaining in the "temporary reserve" after last year's auctions of reserves were completed in October 2015. From November 1 to January 5, an additional 58 mmt of corn was purchased for the "temporary reserve" as proceeded at a surprisingly fast pace. That leaves a cumulative total of 210 mmt in the temporary reserve as of January 2016. approximately equal to a year's production of corn. (The Grain and Oils News author appears to have transposed digits in reporting the total as 201 mmt.) 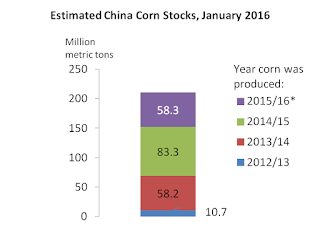 A corn market analysis by Funeng Futures emphasizes that the corn price is detached from domestic supply and demand and from the international price due to government price-intervention and an import quota that makes it hard for private companies to buy cheaper corn from the international market. The "temporary reserve" price support policy for corn is expected to continue into next year because the government does not want to let farm income drop too much, and there are still problems to be ironed out with the target price policy being piloted for cotton and soybeans. In view of estimated production costs, industry people expect the reserve price for corn to be cut to about 1850 yuan per metric ton for 2016/17. That would be down from 2000 yuan for 2015/16 and 2240-2260 yuan for 2014/15.

The Ministry of Agriculture plans to cut corn production in 2016 through its structural adjustment program which will convert corn area to more sustainable crops in a "sickle"-shaped belt from the northeastern Russian border through the northwestern periphery down to the southwest. This will address what Funeng Futures describes as a corn market that has had excess supply for many years.

Well what a dilemma. I know a letimotiv of DimSums is, it's not easy to get reforms implemented in Chinese agriculture, even when those reforms are designed to be market oriented. Anyway, here is a wild and crazy idea. Authorities understandably want to support rural income, and unload the excess supply. How about figuring out some way to just gift the inventory back to small producers, and allow them to figure out how to market it somehow for their own benefit?

I have been following this blog for years now and find the information extremely helpful and insightful. Does anyone know who or which organization runs it?