China imported 380,000 metric tons of corn from Ukraine during May 2015, bringing China's shipments from Ukraine to over 2.1 million metric tons (so far) for the market year that began in October 2014. The Ukrainian corn accounts for over three-fourths of China's corn imports for 2014/15 so far. 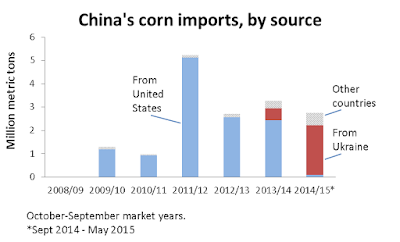 In previous years, the United States was China's main overseas supplier of corn, but during 2014/15 China has imported less than 100,000 mt of corn from the United States. That volume is comparable to the quantity imported from Laos and half of the volume imported from Bulgaria. How did China come to snub the world's largest corn exporter and open up a corn pipeline from the Ukraine?

The Ukrainian corn connection is a calculated strategy to break China's dependence on the United States for corn imports. It is also tied into the grand strategies of "going out" and "one road, one belt" that intertwines infrastructure investments by Chinese companies with creation of agricultural export bases to supply China's growing appetite for agricultural commodities.

As China's corn imports soared during 2012, China rushed to sign an agreement to allow corn imports from Ukraine. The first Ukrainian shipment to China in December 2012 was described in a Chinese customs bureau analysis as breaking the U.S. status as sole foreign corn supplier to China. 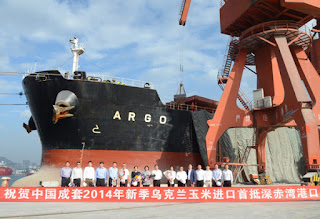 State-owned Chinese entities have been linked to big (and murky) investment deals in Ukraine.
China had been exploring Ukrainian investment since at least 2004, when Chinese diplomats prepared a report evaluating Ukraine as a potential target for Chinese outbound investment. However, the report's only mention of agricultural investment was tea--the report emphasized energy, construction and heavy industry. China was a corn exporter during 2004, and procuring grain from Ukraine was not on China's radar screen then. This changed when the country started importing large amounts of corn during 2011/12, and there seemed to be consensus among Chinese officials that China's corn imports would keep rising as the country raised more livestock. There was consternation that the United States was its sole foreign supplier.

China National Complete Engineering described its November 2014 shipment of Ukrainian corn to China as an important part of the country's $3 billion investment in Ukraine and an implementation of the "one belt, one road" strategy--Ukraine is said to lie in the center of new trade routes from Asia to Europe. The project was described as an innovative approach to foreign agricultural investment in which both sides cooperate. According to the company, the Ukrainian grain shipments "increase the international competitiveness of a Chinese enterprise," ensure China's food security, and "give China a voice in the international grain market."

The agricultural projects in Ukraine appear to have been tacked on to bigger plans for infrastructure and energy projects. China National Complete Engineering is a state-owned company engaged in energy, construction, and port projects in places like Angola, Zambia, and Myanmar. The company's main business in Ukraine is building rail and highway projects that were launched in 2011 by an agreement signed by then-Premier Wen Jiabao. All the agricultural development projects listed on China Complete Engineering's web site are in Ukraine: vague descriptions of plans to raise corn, soybeans and livestock and construction of a pesticide factory. The company does not appear to have any expertise in agriculture.

The 2012 Chinese customs report cited above said one reason for the Ukrainian corn deal was to "suppress the Americans' abuse of price-setting power for corn." Numerous articles refer to the Ukraine deal giving China price-setting power for corn on the international market. Those purported worries about Chinese users being overcharged for corn by the Americans now appear laughable since Chinese companies are now being cajoled by the Chinese government to buy domestic corn at prices 50-to-60 percent higher than the price of imported corn.

According to a March 2015 Reuters report, Ukrainian corn shipments for April-May 2015 had a cost of 1500 yuan per metric ton including cost and freight, about 60 percent less than the cost of domestic corn. According to Reuters, the purported price-gougers in America that Chinese officials were so worried about are now charging 80 yuan less than the price of Ukrainian corn.

Chinese companies can't import corn without a share of the tariff rate quota doled out by the Chinese government. Sixty percent of the quota is doled out to COFCO--one of the companies that signed a deal with Ukraine in 2012. China National Complete Engineering mentions that corn it procures at a favorable price in Ukraine is shipped to China by COFCO.

A May 12, 2015 report announced that the northeastern port of Dalian had received its first-ever shipment of Ukrainian corn. The corn was supplied by China Complete Engineering, described as a sign of progress in the Ukrainian project. Interestingly, the shipment was described as a "breakthrough" as a "new model" for supplying grain to the northeastern region--China's main corn-producing area.

A processing company is importing Ukrainian corn and re-exporting the final products. The Xiwang Sweetener Company in Shandong Province imported 150,000 mt of Ukrainian corn that will be processed into sugar products (anhydrous glucose, crystalline fructose, sodium gluconate, and maltodextrin) and then re-exported. Chinese authorities like to set aside import quotas for such "processing trade" whenever possible so as to insulate the Chinese market from cheap imported raw materials.

In February the first 55,000-mt shipment of Ukrainian corn arrived at the Zhangjiagang port in Jiangsu Province. The corn was distributed to feed mills in Zhejiang, Shanghai, Anhui, Hubei, and Sichuan Provinces.

In May, a feed mill supplying a Tibetan chicken breeding facility imported a 1073 mt shipment of Ukrainian corn. 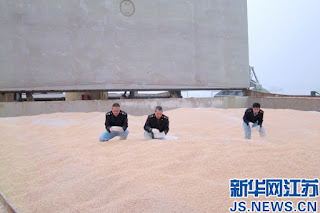 Chinese companies are not importing U.S. corn because there is still uncertainty about whether shipments may be rejected for genetically-modified content. Although the MIR 162 variety has been approved, no one knows whether another unapproved variety might be discovered. The Reuters article reported that importers are unwilling to accept the risk. Many of the articles on Ukrainian corn emphasize that it is non-GMO.

In contrast to U.S. corn shipments that regularly wait for days or weeks berthed at Chinese ports waiting for inspection and quarantine, the Ukrainian corn is getting special attention. Regarding the Shandong corn shipment, the local communist party organization assigned an expert group to coordinate the inspections and lab tests in order to ensure the "smooth and secure entrance of the corn into the country." The Jiangsu and Tibetan shipments were described with nearly identical language.

While China National Complete Engineering described its project as "eliminating unnecessary risk", they also admit to encountering "great difficulties" implementing the project. During 2014, it was widely rumored that the Ukrainians would likely default on at least 20% of the contracted amount of corn for the year. Importers holding quotas for 2014 reportedly had their quotas extended to February 2015 to accommodate the delays from Ukraine. China Complete Engineering discounted "unfounded market rumors", presumably referring to the rumored default, but the company acknowledged that political instability has resulted in changes in leadership on the Ukrainian side that complicated the deal.

A report from a consultancy called Ukragroconsult estimates that  Ukraine's corn production and exports will fall in 2015/16. Corn planting in Ukraine has fallen this year and use of fertilizer, pesticide, and high-yielding imported corn seed are down due to monetary pressures.

It's impossible to eliminate risk from agriculture. In snubbing the leading corn exporter to mitigate an imagined risk from reliance on U.S. corn, China has exposed itself to a new set of risks in Ukraine. To counter a purported U.S. monopoly, a new set of monopolies and fiefdoms have been created which overcharge Chinese processors for corn. Chinese officials and state-trading companies get to choose who gets cheap imported corn and who doesn't. Chinese officials are allegedly protecting consumers from the dangers of genetically modified American corn, but China is preparing to grow genetically modified corn itself several years down the road (more on that in a future post).

Welcome to the "decisive role of the market," Chinese-style.
Posted by dimsums at 10:38 PM

Getting a legitimate loan have always been a huge problem To clients who have financial problem and need solution to it. The issue of credit and collateral are something that clients are always worried about when seeking a loan from a legitimate lender. But.. we have made that difference in the lending industry. We can arrange for a loan from the range of $2,500. to $500,000.000 reply to email (urgentloan22@gmail.com)

Thanks a lot for giving this information. Your blog article is really very nice and well written. Please keep sharing

Oh my goodness! a great post dude. Thanks a ton However I’m experiencing trouble with ur rss . Do not know why Struggle to register for it. Is there any person getting identical rss problem? Anyone who knows kindly respond. Thnkx third party supplier product quality inspections