Chinese GMOs: Scientists On the Offensive

Last month, Chinese scientists struck back against consumer fears about genetically modified crops. One scientist gave a speech designed to boost confidence in genetic engineering at a food safety forum held in Beijing. At another meeting last month a scientist noted that China has numerous genetically modified corn varieties that could pass  the country's multistage approval process within 3-to-5 years.

At a "media training camp" on food safety sponsored by China's State Council, Professor Luo Yunbo, dean of Food Science at China Agricultural University, emphasized that this is the "biological century," and predicted that biotechnology will play a major role in food, environment, health and medicine. Luo emphasized that biotechnology is more predictable and efficient than conventional breeding.

Luo dispelled three rumors that have been circulating on the Internet in China. A French study claiming to find more tumors on rats fed genetically modified corn was retracted by the journal that published it. Many Chinese people think Americans don't eat GMOs, but in fact nearly all the corn and soybeans consumed in the United States are genetically modified. It's not true that no GMO foods are available in Europe and Japan--the foods don't have to be labeled if they contain less than 1% GMO material in Europe and less than 5% in Japan. (In mainland China there is a zero tolerance.) Luo also dismissed other rumors as nonsense--that genetically modified corn makes Chinese men infertile, and that GMO cotton induced 200,000 Indian farmers to commit suicide.

Professor Luo called for educating the public about genetic engineering so that genetically modified foods will have good prospects for development.

Caijing news reported on the speech by Professor Wang Guoyang of the Chinese Academy of Agricultural Sciences given at a June 24, 2015 conference on research and application of Bacillus thuringiensis (Bt). Professor Wang said Chinese seed companies are seeking safety certificates for a number of genetically-modified pest-resistant corn varieties. He estimated that the new seeds could be commercialized in 3 to 5 years after navigating the multiple stages of approval: lab research, intermediate trials, environmental release, production trials and application for safety certificates.

There is great demand among farmers for pest-resistant varieties because insects like corn borers and army worms destroy an estimated 30 million metric tons of the corn crop annually. During 2012, Caijing said an army worm infestation that began in the northeast affected 50 million mu of corn fields, including 640,000 mu where the crop was completely destroyed. 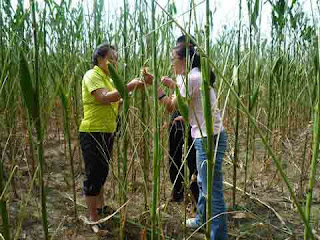 Caijing pointed out that severe pest pressures prompted adoption of Bt cotton in 1999. The pest-resistant cotton was almost universally adopted in eastern China, allowing production to rebound after being devastated during the 1990s.

Caijing notes that China's Ministry of Agriculture has set priorities for commercializing GMO crops: first, nonfood crops like cotton; then crops like corn for feed and industrial processing; and finally food crops--presumably rice and wheat.

According to Caijing, MOA is moving toward commercialization of genetically modified pest-resistant corn. In June 2014, the Ministry of Agriculture reportedly launched a "research on industrialization of genetically modified pest-resistant corn" task force to set up a system to move new GMO corn varieties through the stages of approval to ultimately commercialize their use in China. The task force was to begin work in January 2015 and complete its work by the end of 2017.

This is a nice and very helpful post about Health.
I have enjoyed it from your blog and looking forward to see more from you.
Thanks....!
GE 8C