Rent Out Land At Your Own Risk

China has a grand experiment to retain collective ownership of village cropland while encouraging villagers to rent out the rights to use the plots of land allocated to them. This untried separation of ownership from use rights is adventurous and quite risky in an environment where there is little protection of property rights and little understanding of or respect for law. 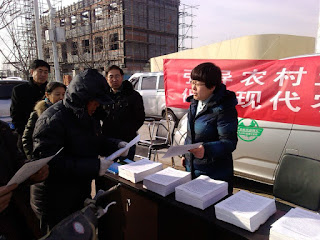 China's Banking Times reports that Chinese villagers have six worries when they consider renting out their land.

1. Lack of formal agreements leads to frequent disputes. Most land transactions in remote areas are verbal agreements between villagers that don't specify a length of the contract or a use for the land. Sometimes the renter changes the use of the land or makes improvements to the dissatisfaction of the "owner" who may demand that the land be returned. This leads to many disputes and conflicts.

2. "Owners" worry that their rental payments may dry up if renters with shaky financing run short of funds or if their business fails to prosper.

3. "Owners" worry that they may lose their grain subsidies if a renter changes the use of the land by planting fruit trees or digging fish ponds instead of planting rice, wheat, or corn.

4. Elderly villagers worry that they will have nothing to do and no adequate means of support if they rent out their land. This is a concern for those too old to work in cities, who lack remittances from family members working off-farm, and those who rely on their land to grow food. The rent of 500  yuan per year may not be enough to support the "owner"; he/she could earn 1000 yuan from growing crops. 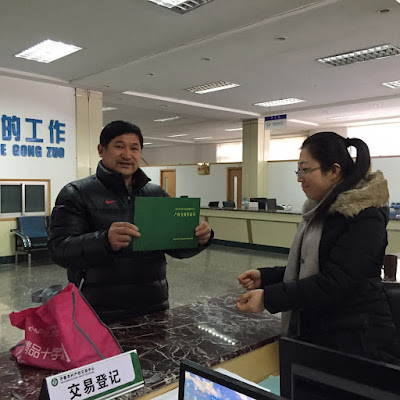 Villager displays his document at a township land transfer center. An ironic reminder of the shaky protection of  property rights this transaction is based on: he's wearing a jacket with a fake Nike swoosh.
Source: Shouguang branch of Qilu Rural Property Exchange.

5. Land could be seized by lenders if renters use it as security for loans. If the renter plants an orchard, raises animals, or builds houses on the land and fails to pay back a loan, the land may be seized by a bank or other lender. The ownership of the land cannot be mortgaged; only the products of the land and maybe the improvements on it. But if a lender doesn't get his money back, he/she may take over the land to recoup his money.

6. "Owners" worry that they won't get their land back at the end of a long-term contract. Companies typically ask for rental agreements of ten years or longer. "Owners" worry that it will be hard to get their usage rights back when the agreement is concluded. What if the renter constructs buildings, plants trees, or makes other improvements? Will the "owner" have to tear them down at the end of the contract?

With laws and enforcement constantly changing at the whim of officials, few Chinese citizens have confidence that deals made toady will be honored in the future. This is a problem for farming and other land-based activities that require long-term investments that are recouped over many years. This leads to a mentality of making as much money as fast as possible--not favorable for "sustainable" agriculture. Sorting out these problems is critical to the success of Chinese agriculture.
Posted by dimsums at 11:09 PM