A Silk Road for Agricultural Investment

The new silk road, or "one belt, one road" strategy was one of the themes at the "2015 China Agri-Business Development Forum" held at China Agricultural University on June 1. (The other theme was e-commerce, another potential game-changer in agriculture.) Several speeches laid out a strategy of proactively developing new suppliers for China's agricultural needs, facilitated by Chinese investment in production, logistics, storage, trading and infrastructure. 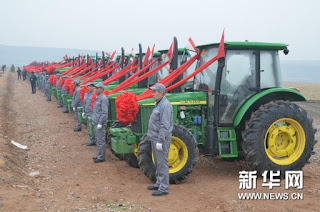 Tractors presented to Tajikistan as part of a Textile Industry Park project.

"China now needs a new strategy [to] maintain sovereignty...and occupy the commanding heights of international agricultural competition," said Cheng Guoqiang, one of China's top agricultural trade strategists. He continued: "'One belt, one road' is an opportunity to reshape the rules of agriculture and maintain stability."

The Chinese vision is to share Chinese technology, infrastructure, and experience in agriculture in various types of environments to improve yields in places like Central Asia. A China Agricultural University professor explained that agricultural "going out" encompasses technical exchange and trading in addition to buying land. The meeting emphasized that China has common concerns about food security with countries along the "one belt, one road", and "grain cooperation" could be a key link for what could be called a "community of interests" or a "community of destiny."

The dominant role of the United States in global agriculture and its Trans-Pacific Partnership initiative are likely an unspoken factor in the background in this Chinese pivot to its west. According to the article, "one belt, one road" countries accounted for about 18% of China's agricultural imports last year. They don't mention it, but that happens to be about equal to the share imported from the United States, China's largest supplier.

In April, Farmers Daily explained that the ancient silk road was once an important conduit for exchange of agricultural products and technologies, and China's "going out" and "coming in" in agriculture is "once again ready to shine."

Farmers Daily said "one belt, one road" countries include some grain exporters like Kazakhstan and Russia that are potential sources for China's "grain import diversification." Since the “one belt, one road” initiative was proposed, Chinese leaders have made many visits to countries along the road and signed agreements with Kazakhstan, Tajikistan, and Kyrgyzstan. 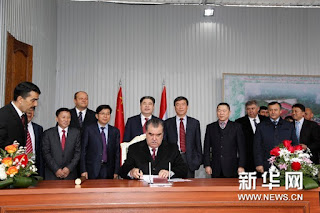 On April 28, China announced the first "National-Level Foreign Agricultural Industry Park" on the Russia-Heilongjiang border. The park was established in 2004 by Heilongjiang Dongning Huaxin Group and reportedly has 68,000 hectares of cropland and livestock processing with investment of $120 million.

"Agricultural 'going out' is not just going overseas to 'cultivate land,'” said Farmers Daily. It is also investment in up- and down-stream industries like processing, logistics, storage and seed; strengthening cooperation in grain, ocean fishing and other key industries; and nurturing a set of large internationally competitive multinational companies. It also involves building a transportation network to link up Asia with Europe and Africa to reduce logistics costs and remove bottlenecks to moving agricultural products.

And all this needs to be financed. Loans from the Asian Infrastructure Investment Bank, BRIC Development Bank, Shanghai Cooperation Bank, and Silk Road Investment Fund are four financing "platforms," supplemented by provincial funds, other banks and investors.

State-owned commercial banks are also in the act. The Agricultural Bank of China promises to support Chinese companies "going out" to propel the "one belt, one road" initiative. The bank says it has already set up a work mechanism for this task, "paying close attention to the government's foreign investment strategy in agriculture, energy, and transportation." The bank is compiling a catalog of potential investments, setting aside funds for companies "going out," and expanding export insurance and other risk management products. The Agricultural Bank has signed an agreement on agricultural investment with the Tajikistan Agricultural Investment Bank. The bank is lending $60 million for a railroad to Tajikistan and 20 million Euros for an infant formula factory in France.

"With people, money, land, infrastructure, 'one road, one belt' can be called the 'east wind' for China’s agricultural 'going out,'” said Farmers Daily.

In March, agricultural officials of Shaanxi Province held a meeting with business leaders where they heard that agriculture is an important area for developing economic cooperation in Central Asia under the new silk road initiative. Leaders of 14 companies, including Haisheng Fruit Development Co.--the leading supplier of apple juice concentrate--heard about opportunities and support policies for "going out." Each company explained their experience with foreign investment, plans and difficulties they face. Jiangxi Province had a similar meeting in April.

At the Agricultural Development Forum, Cheng Guoqiang said Kazakhstan has great potential to produce more wheat since its average yield is only one-fifth that of China. Let's hope China is aware of the Aral Sea disaster that shows the consequences of short-sighted crop production in an arid region. 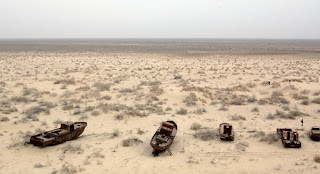 Hi, how are you? My name is Richard. If you were a scientist, what would you investigate in Silk Road and Agriculture topic?

Thank you in advance.