Chinese officials are obsessed with self-sufficiency because they don't believe in equilibrium. They view the market as an inherently unstable mechanism in which the winner takes all. In their binary view of imports and domestic products, once imports gain a foothold, they will inevitably take over the market and completely drive out domestic producers. Therefore, this thinking dictates that China must block imports or isolate them from the domestic market by confining them to special economic zones, export-processing, or state-trading monopolies. This linear, binary thinking is an impediment to finding an equilibrium between imported and domestic supplies of food that is surely China's future.

Two views of the way forward in agricultural markets are contrasted this month in (1) a speech by a top policy advisor and (2) an essay about the dairy industry that appeared in a Chinese livestock industry journal.

A speech to an international agribusiness conference in Beijing this month by Han Jun, China's no. 2 rural policy advisor, voiced anxieties about pressure on Chinese agricultural producers from lower-priced imported commodities. He assured his audience that import quotas would maintain self-sufficiency in cereal grains, but he worried that commodities not protected by quotas are facing serious pressure.

The knife-edge, all-or-nothing view of trade was reflected in Han's concern that China's dairy industry is "near the point of life or death." Its costs exceed those of imported milk, the industry is still under the shadow of the melamine incident, and faces pressure from even more imports as the European Union gives up production quotas and a free trade agreement with New Zealand will lower barriers to milk from that country, Han said.

A more nuanced article in a livestock industry journal on "restructuring for development" in China's dairy industry recognizes the complexities of the industry and outlines a possible future scenario in which imports and domestic milk will share the market.

The article sees conflicts between domestic and imported milk, between processors and farmers, and between overseas and domestic investment in dairy production. The author estimates that the 1.8-million-metric-tons of dairy imports--mostly milk powder--during 2014 constituted one-third of China's milk supply when converted to fluid milk-equivalent. At average output of 6,000 kg per cow, he estimates that imports are equivalent to 2.3 million lactating dairy cows. He notes that nearly all dairy products, yogurt, baked goods, and confections in China use imported milk powder for at least part of their raw material. The writer sees a lack of cooperation between farmers and processing companies who fight over shares of a fixed pie. 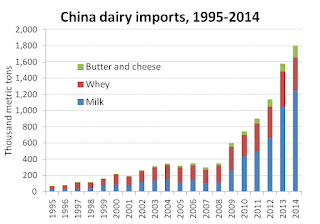 The article acknowledges that it will take time for China's dairy industry to become competitive. Small and medium-scale farms--the "backbone" and future of China's dairy industry according to the writer--need time to raise productivity and hence reduce unit costs to become internationally-competitive. Developing quality feed resources, disease prevention, and an effective breeding system needs time. The article describes the construction of large-scale farms in recent years as a "detour" that exacerbated the conflicts between farmers and processors.While the author doesn't mention it, the surge of (subsidized) imported dairy cattle may also be a sign of panic a short-sighted measure.

Farmers need to strengthen management, develop high-protein forages, and use other measures to reduce costs. Processors should provide a stable outlet for farmers' milk. The government and industry association should coordinate the process, says the livestock industry article.

The article outlines a segmented dairy market for China's future. Domestic farms should acknowledge that they do not have a cost advantage vis a vis imported milk. Instead, domestic milk producers should differentiate their product to emphasize its freshness and nutrition. The author suggests that Chinese milk producers concentrate on serving local markets with low-temperature (pasteurized?) fresh milk at premium prices while leaving the room-temperature (UHT?) market to imports.

This nuanced view of the dairy industry's future contrasts with the monochrome thinking of Chinese officials who seem unable to comprehend the complexities of the world. Chinese officials cling to a groupthink that views agricultural commodities as uniform, generic products produced by 200 million identical farmers. They generally fail to recognize that there are substitutes for commodities. In this simplistic view of the world, a slight cost advantage for imports means that  they will completely dominate the Chinese market. Therefore, the Chinese official insists that Chinese farmers and companies must be sheltered behind a wall of quotas and other trade barriers with endless subsidies as a lifeline.

In actuality, an equilibrium is reached before  all countries have a range of producers with different types and grades of products and differing productivity and costs. As China's imports increase and prices fall, high-cost producers will leave the sector, leaving the most efficient ones still in business. The market price is determined by the marginal producer, not the average. At some point, the marginal Chinese dairy producer will be competitive with the marginal producer overseas. Chinese producers can tailor their products and marketing to make the most of their advantage.

China needs to abandon the groupthink paranoia of communist party officials, be patient, and think about a future where domestic products and imports coexist on the shelves of China's supermarkets.
Posted by dimsums at 9:42 PM