Most of the 2015 livestock programs reflect a decade-long campaign to reshape the livestock sector into a "modern" industry launched during the 11th five-year plan. By 2005, the sprawling, chaotic sector composed of hundreds of millions of "backyard" producers had become subject to cyclical swings in prices and disease epidemics, including a serious avian influenza outbreak at the time. Chinese officials made "livestock modernization" a theme of the five-year plan for 2005-10. The programs gained more impetus from an epidemic of "blue ear" disease combined with a mass-culling of sows in 2006-07 that sent pork prices soaring and the dairy industry's melamine adulteration crisis that came to light in 2008. 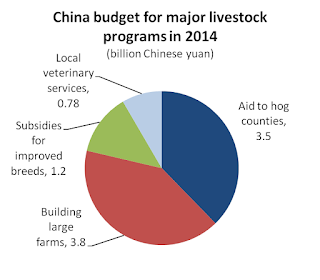 Much of the support is channeled through government officials and companies, and much of it is targeted at hogs. One of the two largest components is 3.5 billion yuan ($570 million) in financial "awards" for major hog-producing counties to help local officials finance construction of modernized farms, subsidies for insurance premiums, subsidized loans for pig farms and pork processors, and costs of disease control activities. The aid for hog counties is designed to incentivize local officials to expand local production and supply pork outside the county. Counties are chosen to be one of the approximately 500 recipients of aid based on a formula that weighs three statistical indicators: number of hogs sold out of the county (50% weight), number of hogs slaughtered (25%), number of hogs in inventory (25%). Counties producing more hogs have a better chance of getting the aid. (It also gives county officials incentive to pad their statistics.)

The largest livestock program subsidizes construction or refurbishment of large-scale livestock farms or livestock production "zones" (养殖小区) where multiple farmers keep their animals in a single location that resembles a large-scale farms. Funds can be used for roads, water, and electricity for farms, manure treatment, disease control, milking facilities, and quality testing labs.

China's third major livestock program, with spending of 1.2 billion yuan ($195 million) in 2014, is a subsidy to encourage use of improved breeds that began in 2005. It mainly subsidizes artificial insemination of swine and dairy cattle, but it has been expanded to include beef cattle, sheep, and Tibetan yaks. The subsidy for sows is up to 40 yuan per year per sow (10 yuan per attempt, up to four per year). The subsidy for cattle is 30 yuan per insemination for Holstein and Jersey cattle, 20 yuan for other dairy breeds, and 10 yuan for beef cattle. Improved-breed subsidies are 800 yuan per animals for a sheep ram and 2000 yuan for a yak bull. This year a new subsidy of 5000 yuan for dairy cow embryos has been introduced.

Disease prevention and control is probably the most important livestock program. This includes free compulsory immunizations for high-priority diseases, compensation for culling animals infected or exposed to key diseases, and aid for disposal of diseased carcasses. Compulsory immunizations include those for highly pathogenic avian influenza, foot and mouth disease, classical swine fever, highly pathogenic "blue ear disease" (PRRS), and a sheep disease (peste des petits ruminants). The Ministry of Agriculture and provincial governments procure vaccines from manufacturers via a bidding process and distribute them to local veterinary stations.

Compensation for culling for disease control covers animals exposed to the same diseases that are the focus of free immunizations plus dairy cattle that are TB-positive or infected with brucellosis.

The disposal of diseased hog carcasses became a priority after the 2013 incident of floating pigs in Shanghai's Huangpu River. The butchering and sale of meat from dead hogs is another major food safety and public health concern. Farmers get 80 yuan to dispose of dead swine properly by burying them or depositing them in a pit where chemicals break down the carcass. Previously, this aid was only given to farms producing 50 or more hogs per year. This year, small backyard farmers are also eligible. Designated slaughterhouses can also get compensation for disposing of diseased hog carcasses. They can get 800 yuan per head in compensation for a diseased carcass, plus 80 yuan to dispose of it (instead of butchering it).

Last month a vice minister of agriculture gave a speech describing China's progress in livestock insurance since it was first offered for reproductive sows in 2007. Since then, subsidized insurance has been expanded to cover dairy cattle, fattening hogs in some provinces, yaks, and Tibetan sheep. In Chengdu and Chongqing there are pilot insurance programs for broiler chickens, laying hens, ducks, and rabbits. The vice minister said the insurance now covers 121 million animals and income from insurance premiums is 4.9 billion yuan. Like other livestock programs, the subsidies are shared by central, provincial, and local governments.

The insurance mainly covers loss from disease and natural disasters. Price index insurance for hog producers in several pilot regions is an experimental approach to helping farmers bear market risk. In one city in Zhejiang, insurance indemnity payments are given only when farmers have confirmed that carcasses have been properly disposed of, an experimental measure to prevent diseased animals from entering the food supply.

No expenditure on subsidies for insurance programs was reported. Part of the county award funds can be used to cover subsidies for insurance, but the vice minister said tight budgets in livestock counties undermined local officials' enthusiasm for insurance programs and led to late indemnity payments. The vice minister said that livestock insurance is in its exploratory stage, most farmers don't understand insurance, tend to rely on luck, and enthusiasm for participation is dampened by the shortfall between indemnities and value of animals and by late payments on claims. Insurance companies have a hard time verifying the number of insured animals and claims, and they lack employees who understand the livestock business.

The sow subsidy of 100 yuan per head is missing from the list of this year's livestock policies. The sow subsidy is opaque and is often not given in years when the hog industry has excess capacity and low prices.

Many local governments have their own programs. Kedong County in Heilongjiang has subsidies to encourage development of large-scale dairy farms. Farmers there get a subsidy of 0.30 yuan (4.8 U.S. cents) per kg of milk sold, 10 yuan per mu for planting corn for silage, a subsidy for building silos of 50 yuan per cubic meter, half  the cost of installing automated feeding equipment, and 300,000 yuan for building manure treatment facilities.

While the livestock industry sounds like its getting a lot of money, it's a tiny proportion of the industry's value added. Grain subsidies are more than ten times subsidies for livestock, but the value of grain production is only about half the value of livestock output.