As shipments of imported sorghum soar, inspectors at Chinese ports are carefully scrutinizing the grain for problems. Inspection and quarantine authorities say they have stepped up inspections and testing to prevent new pathogens and weeds from entering the country, but more cynical observers might suspect that the inspections are a disguised trade barrier.

A May 4, 2015 article entitled "The 'Hidden Killer' in American Sorghum" announced the discovery of a pathogen that causes "grape vine blight" in a 49,000-metric-ton shipment of U.S. sorghum at a port in Shenzhen. The article originated with China's inspection and quarantine authority and has been re-posted on a number of Chinese web sites. The pathogen, phoma glomerata, is said to have a wide range of possible hosts, could threaten "hundreds of plants," and could inflict "incalculable" losses on China's environment and agricultural production, according to the article.

Phoma glomerata was previously detected by port inspectors in a shipment of soybeans arriving at Shanghai's port in 2013 and in fruit saplings from Italy at Ningbo in 2012. Those detections did not cause much of a stir. 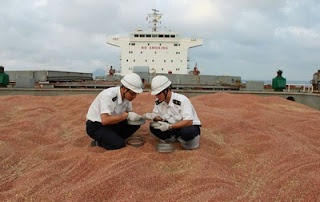 Inspecting a sorghum shipment at Yangjiang port in Guangdong. ﻿

The Shenzhen authorities demanded that trucks and warehouses take precautions to prevent the spread of pathogens from the sorghum in transit to 13 feed mills in three provinces. They ordered that the sorghum be kept separate from other materials in centralized warehouses, that transportation equipment and storage facilities be disinfected, and that residual materials from processing the sorghum be destroyed.

The May 2015 article reveals that the detection of phoma glomerata is the result of a nation-wide campaign to scrutinize imported feed grains launched this year. According to the article, the scrutiny was prompted by the surge in sorghum imports which totaled 1.36 million metric tons in January and February, a six-fold increase from the same period last year. The article warns that imported feed grains have a high risk of transmitting hazards that can spread widely throughout the country to small feed mills.

Bureaus of inspection and quarantine (known as CIQs in China) at several other locations have published similar reports with similar language, indicating that this is a nationally-coordinated campaign.

Tianjin's CIQ reported testing 141 samples taken from shipments of sorghum, corn and other grain during the first quarter of 2015. They reported that 71 of the samples had weeds and other harmful organisms that were destroyed. The Tianjin authorities reported that they are targeting their scrutiny based on information about particular grains, country sources, and historical interception of pathogens, weeds, and other problems. They have stepped up lab testing for pathogens, agricultural residues, heavy metals, and genetically modified materials. They are scrutinizing transportation, storage, and processing facilities to look for risks of contaminated grain leaking into the surrounding environment.

Yangjiang port in Guangdong reported finding no major pathogen risk in the first-ever shipment of imported sorghum arriving at the port this month.

In July 2014 authorities issued a similar document that ordered inspectors to closely inspect and test imported sorghum and barley.

Is this heightened scrutiny of sorghum really intended to address potential risks of pathogens and invasive weeds? Or is it being orchestrated as a disguised barrier to slow down imports? It's hard to tell.

The news articles all use similar jargon about risk analysis, indicating that someone at the top of the inspection and quarantine bureaucracy has dictated that all CIQs use risk analysis methods probably acquired from some training course given by an international organization or foreign counterpart. To be fair, the sudden surge of imports does pose a risk of transmitting new weeds and other organisms to China. Over the  years, trade and immigrations brought the United States invasive weeds like Russian thistle and kudzu, chestnut blight, and other species that severely affected crops and ecological balance. China is on guard against similar invasions as it receives a swelling tide of agricultural imports.

However, the timing of the crackdown is suspicious. Chinese grain officials are trying to sell off a huge stockpile of corn they have accumulated from three consecutive years of big surpluses, including over 83 million tons of corn from last fall's harvest. The availability of cheap imported sorghum undermines the government's ability to sell off their corn stockpile which has been estimated to be as large as 150 million metric tons. The urgency of disposing of the stockpile has become even greater as yet another record corn harvest is expected in 2015.

An investigation of feed demand in Guangdong Province last month by a group of Chinese futures market analysts illustrates the problem. The group learned that last year feed mills began to import sorghum to replace about 30% of the domestic corn they normally use in feed formulations. This year, the substitution rate was believed to be as high as 50%. Some duck feed formulations have eliminated corn. Feed millers said imported grains are 400-500 yuan cheaper per ton than domestic corn. Ironically, another advantage cited by the Chinese buyers was a lower level of toxins in the imported grain compared with domestic Chinese corn.

If Chinese inspection and quarantine authorities are sincerely trying to control hazards, they had better communicate with their foreign counterparts to resolve the problem. If they fall into their usual mode of going incommunicado or dribbling out cryptic answers to inquiries--as they did with last year's MIR162 incident--their foreign counterparts will be inclined to conclude that this is yet another disguised trade barrier. China's use of funguses and opaque bureaucracy to manipulate imports is slowly poisoning its trade relations with agricultural exporting countries.
Posted by dimsums at 11:24 AM

Ditto, your Ag coverage is exceptional. This is a google-ish question, but for the sake of discussion, does sorghum stand the chance of running into a similar "low-level illegal GM contaminate" trade problem like Syngenta's corn did last year?