The China-Australia free trade agreement will gradually reduce tariffs to zero on Chinese dairy imports from Australia. This follows a 2008 China-New Zealand FTA that contributed to a New Zealand dairy-export boom. A November article in a Chinese publication, Economic and Nation Weekly, asked whether the competition from imports would pressure the Chinese dairy industry.

China's current tariffs on dairy products are mostly 10-to-15-percent, so the tariff reductions in theory could increase imports that would reduce the market share of Chinese companies. The low price of imports is expected to put downward pressure on domestic prices for Chinese companies. 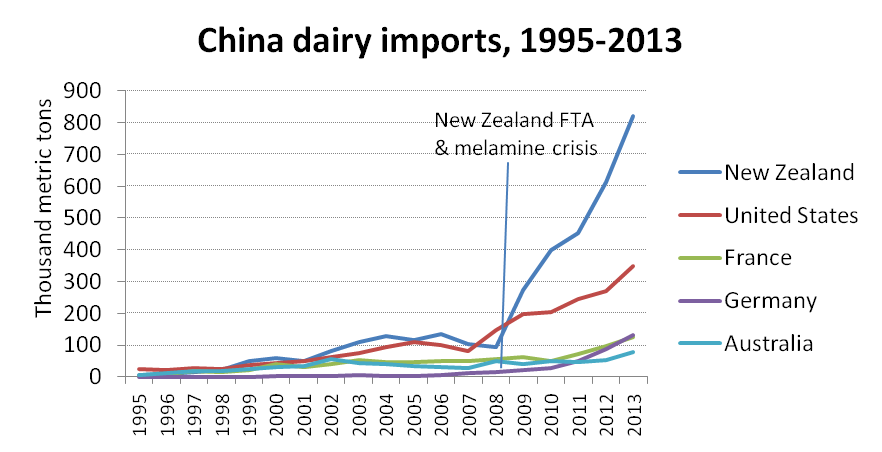 Industry experts point out that Australia still has a small share of China's dairy imports--about 10 percent for milk powder. They also point out that there are a diversity of products. European countries tend to sell finished products like cheese to China, while New Zealand mostly sells milk powder used to manufacture dairy products in China. One industry expert asserts that prices of final products in the Chinese dairy markets are still set by a few large domestic companies.

Both New Hope Group and Yili Group say they have strategies to invest in a global supply network to meet Chinese consumers' growing demand for dairy products. An official from another Chinese dairy company, Flying Crane, said Chinese companies are preparing for the future by developing partnerships with foreign companies to gain access to technology, develop international brands, and cut costs.

The expansion is not limited to Oceania. Also in November, Yili announced a plan to invest in a US$ 100-million dairy processing facility in Kansas in partnership with Dairy Farmers of America, Inc.

An official from the Chinese dairy industry association worries about China's exposure to global price fluctuations. He calls for establishing a national milk powder reserve that he thinks could be used to stabilize Chinese prices.

Thanks for sharing this post. After a long time, such a post has been seen, it is a very interesting subject, people like it. When someone shares this kind of article, the mind is happy Thank you for this article. IMT Manesar Girl low price
Hyderabad Party Girl
gurugram girl number
College Girl Gurugram
newly married Girls Bhiwadi
VIP girl mahipalpur
gurugram girl number
VIP Girl Gurugram