A crackdown by agricultural authorities and police in Qingdao indicates that abuse of veterinary drugs in the production of poultry and other livestock is rampant in China.

In May 2014, the Qingdao Bureau of Animal Husbandry and Veterinary Medicine launched a six-month campaign to shut down illegal veterinary drug manufacturers and clamp down on illegal use of pharmaceuticals in the raising of poultry and livestock. One of the focal points of the crackdown is the city of Pingdu, major poultry-producing area. It is probably no coincidence that Pingdu was also the focus of a 2012 scandal when it was discovered that a major supplier to Kentucky Fried Chicken restaurants was raising chickens on as many as 20 drugs and failing to obey required withdrawal requirements before slaughter. At the time, Chinese news media focused blame for this "quick chicken" scandal on KFC while the core problem of on-farm veterinary-drug abuse received little attention. Authorities are now cracking down on problems, but the campaign is being conducted out of the public's eye with only modest publicity. 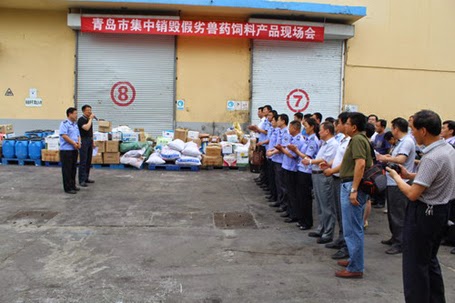 Officials celebrate their crackdown on veterinary drugs in Qingdao.

The crackdown includes shutting down black dens of illegal veterinary drug manufacturers as well as policing on-farm abuse of pharmaceuticals. It includes wide-ranging problems, such as production by unlicensed manufacturers, fake drugs, false or exaggerated claims, lack of testing documentation, absent or fake labels and registration numbers, and repackaging or reprocessing of banned substances. Livestock farmers are being watched for use of fake or forbidden medications, use of medications intended for human use, excessive doses, products that failed testing, excessive use of antibiotics, failure to stop drugs within required withdrawal periods before slaughter, illegal use of hormones, and adding illegal substances to feed and water. Many of these abuses were reported in the 2012 poultry-farming scandal uncovered in Pingdu.

During June 2014, Qingdao authorities staged an event where they destroyed a collection of illegal drugs seized from illegal manufacturers and farms. A worker gave examples of seized drugs: boxes that had no registration number or numbers borrowed from other companies; drugs from companies whose licenses had expired; products that claimed to treat numerous pig diseases when they actually were effective only for one.

The official warned that the drugs could harm humans who consume meat from the animals. He said that tests had detected ribavirin, an antiviral drug banned for use in animals. He claimed that the drug is retained in animals' bodies and can lead to antibiotic resistance if the meat is eaten by humans. He also warned against high levels of mold in animal feed which generates toxins that can harm humans, and may possibly be carcinogenic, according to the official.

Officials and police said they had dealt with 83 cases of illegal behavior related to veterinary drugs and feed additives since 2013. Four cases were referred to police and 13 people were arrested.

In August, Qingdao's Animal Husbandry Bureau reported taking actions to improve supervision of veterinary drugs and feed additives.  They formed a task force under the Bureau's vice director, set up systems to monitor manufacturers and farms, and planned to increase publicity and training.

The drug abuse problems are not unique to Qingdao. There was a brief national campaign in March 2014 and several other localities have launched crackdowns on veterinary drug manufacturers or included drugs in campaigns against fake farm inputs.

Building the world's largest livestock industry in a country that is also the leading producer of chemicals and pharmaceuticals is a dangerous recipe.
Posted by dimsums at 10:44 PM