On December 18, China's central television network (CCTV) revealed that some farms use as many as 20 different drugs to raise chickens, and some use excessive doses or banned drugs. This incident again shines a light on pervasive food safety problems in China as the country adopts an industrialized food system. Laws, regulations, and certifications present on paper are routinely flouted and there is seemingly no effective mechanism that can assure final consumers that their food is safe to eat.

The main revelation of the CCTV report was that farms in several locations of Shandong Province violated regulations that require farms to stop feeding drugs to chickens 7 days prior to slaughter. The chickens were delivered to local slaughterhouses of big poultry meat companies, Liuhe and Wintech, which supplied fast food chains like KFC and McDonalds. 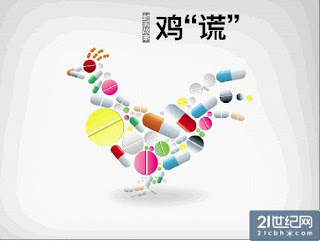 A cartoon from a Chinese commentary mocking the use of drugs for raising chicken: "Chicken 'famine'"

The farms raised "white feathered" chicken breeds known in China as "quick chickens" (速生鸡) because they grow to a market weight of about 5 lbs in 40 days. In comparison, native breed "yellow-feathered" chickens take 100 days to reach about 2 lbs. and traditional free range chickens are raised for a year. According to a news media report, the "quick chickens" are raised in houses 15 x 50 meters containing thousands of birds--15 chickens per square meter according to one farmer's estimate. The lights are left on night and day to encourage the birds to eat as much as possible. The boss of one Shandong chicken farm says the stress and the failure of birds' internal organs to keep up the growth of their bodies leaves them in a weakened state and vulnerable to illness. The farm operator insists that following the regulations would kill the birds since they can't survive more than 3-to-5 days without drugs.

According to reports, Shandong farms give chickens as many as 20 different pharmaceuticals. One company farm boss said they alternate two antibiotics--amoxicillin and chloromycetin--to prevent pathogens from developing resistance. Regulations forbid use of ofloxacin--a drug often used to treat human ear infections--within 28 days of slaughter, but many farms use it up to 2 days before slaughter.

One of the strategies adopted by the farmers is to give the birds a steriod called dexamethasone that promotes weight gain and speeds up the production cycle to 35 days. 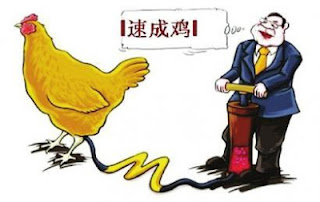 The focus of the CCTV report was on two antiviral drugs, ribavrin and amantadine, which have been banned for use in poultry since 2005. Amantadine was introduced in the during the 1960s to treat Asian flu in humans. According to a 2005 Washington Post article, Chinese farmers began using amantadine to treat chickens for avian influenza in the 1990s, and government veterinarians promoted its use during China's big AI epidemic in 2004-05. Widespread use of amantadine is blamed for developing resistance in the H5N1 strains of the virus  in China, Thailand and Vietnam that rendered the drug useless for treating humans.

Chinese regulations require chicken farms to keep detailed records on daily use of medications, chickens' health status, the sale date and purchases of inputs. According to the news media report, the farm records were filled out by inspectors at the slaughterhouse. Inspectors at slaughterhouses said animal quarantine certificates were issued even though the chickens were never tested.

Some of the Chinese news media reports focus on the culpability of Yum Brands, the company that operates KFC restaurants in China. The Liuhe slaughterhouse in Shandong had supplied chicken to Yum for use in its fast food restaurants in Shanghai, hundreds of miles from Shandong. Yum paid a laboratory operated by the Shanghai Municipal Food and Drug Administration to test samples of the meat supplied by Liuhe every two months. Although the lab is under the Shanghai FDA, this testing was not part of its government food safety monitoring function--such labs often act as a quasi-private-sector "third-party" testing entity on a fee basis for private businesses.

According to another news media report, Yum had 19 batches of chicken tested by the Shanghai lab during 2010-11, and 8 of those batches tested positive for excessive antibiotic residues. There were no tests for hormones.

Yum acknowledged that tests revealed excessive drug residues in some chicken supplied by Liuhe in 2010. Yum cut off a Liuhe supplier in Shandong's Linyi county in 2011 and journalists discovered a farm there that had been closed down for about a year. On December 18, 2012 the Yum company issued a statement saying that it had stopped procuring chicken from Liuhe in August of this year, initially with a vague explanation that it was for reasons of "survival of the fittest" without citing drug problems. A Yum official later said that the company had ceased its supplier relationship with Liuhe for multiple reasons that included the company's service, price and business direction. The 21st Century Business Herald accuses Yum of concealing the test results from the public and failing to issue any recalls.

This graphic accompanied an article reporting on the problems with testing chickens for pharmaceuticals. "Farmers" on the right use "18 kinds of antibiotics" on chickens before selling them to the Shandong Liuhe slaughterhouse (gray circle in the center). Yum Brands (represented by the Colonel Sanders logo) tests for "4 kinds of antibiotics."

This week the Shanghai Food Safety Commission sent out its inspectors to gather samples of chicken from Yum's distribution centers in Shanghai. Out of 8 batches tested for 29 kinds of antibiotics, hormones and antiviral drugs, they found only one sample that tested positive for amantadine. The tests were done at the same testing center that did the testing commissioned by Yum in the past.

In Shandong, the livestock bureau and police organized teams to inspect chicken farms. Two guilty farms have been shut down. Farm operators were detained in one district and hauled in for questioning in another. Two slaughter houses operated by Liuhe and Wintech have been shut down for rectification and raw materials seized for testing and inspection.

This incident has some similarities to the pork industry's clenbuterol ("lean meat powder") incident revealed in March 2011.


The incident raises the question of how safety assurances can be built into supply chains when consumers and producers are separated by hundreds of miles and multiple companies. In theory, big agribusiness companies are supposed to function as "dragon heads" who give farmers training, technical information and help with adopting food safety measures. In reality, profit margins are razor-thin and the threat of disease is always looming. Companies, farmers and even inspectors have a similar interest in churning out animals. There is still an entrenched "the mountains are high and the emperor is far away" mentality in which you carry on business as usual in your locality, falsify records, and clean things up when provincial officials of auditors from the supermarket or restaurant chain come around for an inspection. Regulations, standards, and certificates exist on paper but the consumer can't have much confidence in these if they are routinely flouted.

The companies involved in this incident are parts of large companies that have an interest in avoiding food safety incidents. One suspicious facet of the incident is the focus of blame on Yum Brands, a theme also picked up by Stan Abrams' China Hearsay blog. The anti-KFC rhetoric is coming mainly from state-owned media outlets. Liuhe and its parent company, the feed giant New Hope Group, have direct responsibility for the incident but aren't getting much heat from the media. Liuhe supplies chicken to other customers and supermarkets. Some Beijing supermarkets are removing chicken products from the Liuhe company from their shelves, but this didn't get as much publicity as the role of Yum. Interestingly, there have been a couple of articles in the international media recently about KFC and McDonalds having a harder time competing with domestic Chinese fast food chains. Is there a behind-the-scenes nationalist campaign displace KFC from their leading position in China's fast food market?

One commentary in the financial news media noted that the stock prices of the companies involved were hit by the incident and it exacerbates a year-long slump in the broiler industry. The commentator speculated that a completely integrated supply chain in which the processor operates its own farms may be the most tightly-controlled and "safe" model, but argued that the "company + farmer" model is better suited to conditions in China and notes that this model is also used in developed countries. The commentary insisted that "company + farmer" is the model for the long term and must be combined with effective food safety laws and strict monitoring.

Ironically, a news media account in February this year praised the Liuhe company's innovative "chicken guarantee" model in Pingdu--one of the regions where drug use was discovered. Over 2,500 farmers got loans to buy chicks and feed that were paid back 45 days later when the chickens were sold to the company. Farmers supposedly would be paid the market price if chicken prices went up, but if the price went down before slaughter they would be paid a price that would cover their production costs. Farmers also got insurance, technical advice, and a guarantee that chickens would have a mortality rate of less than 5 percent. New Hope Group, Liuhe's parent company has similar arrangements for pig farmers in Sichuan. Once again, a seemingly carefully-thought-out "solution" has failed to prevent food safety problems.

A 2008 book by Warren K. Liu, KFC in China: Secret Recipe for Success, tries to explain why it's so hard to trust suppliers. Liu was a YUM brands executive in China during the 1990s. He only gave passing references to chicken farms on a few pages of his book but notes that he forced himself to visit countless farms and slaughterhouses. During his tenure KFC centralized and consolidated its supplier base, introduced a competitive bidding system, and took suppliers on tour of U.S. chicken farms. One of Liu's peeves was corruption which took up 6 pages of his chapter on supply chains. Despite strict rules on not accepting any gifts or entertainment and other measures to prevent corruption, Mr. Liu had to fire two employees who took kickbacks from suppliers. Liu agonized over the failure to completely root out corruption but finally concluded there was no way he could have prevented it. The tendency toward "local fiefdoms" in which suppliers, buyers and local officials build loyalty to one another is deeply entrenched in Chinese culture. It's not just a government problem; it's a business problem as well. Be careful whom you trust.
Posted by dimsums at 9:40 PM