Annual wages paid by private employers increased by 18.3% in 2011 to reach 24,556 yuan. Manufacturing wages were up 20.1%.
Annual wages paid by non-private employers (government and state-owed enterprises) increased 14.3% in 2011 to reach 42,452 yuan. By far, the highest wages reported were in non-private financial services (state-owned banks) at 91,364 yuan and non-private information and computer services 70,619 yuan.
These numbers are not adjusted for inflation.

The China CPI number of 5.4% for 2011 is often offered as the measure of inflation but there is wide variation in price increases depending on which index one looks at. So it's hard to say exactly what inflation is in China. 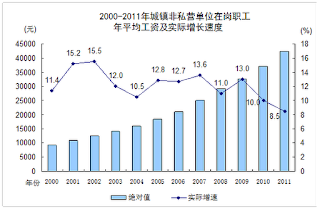 
An article giving an experts' interpretation of the wage data accompanying the articles on the NBS web site  explains that a goal of the 12th five year plan is to increase the amount of income distributed to workers, and all levels of government are reforming wage systems to accomplish this. It says 24 provinces raised their minimum wages by an average of 22%. This matches the average increase in migrant workers wages reported last month by NBS. This growth also is slightly faster than the 20-percent increase in manufacturing wages and 17-percent increase in construction wages. The article also reports that 27 of 31 provinces have issued "guidance wages" in 2011. They are also continuing to issue "allowances and subsidies" to public officials.

Despite the rapid growth in worker earnings, funds are pouring into the coffers of government, state-owned enterprises and state-owned banks. The report says that tax revenue went up 22.6%, more than double the rate of of GDP growth (9.2%). Profits of above-scale industrial enterprises (think SOEs) went up 24.4% in 2011. Thus, more income is in the hands of government and retained earnings of large companies (that are "saved" and not paid out as dividends). Bank deposits held by individuals were up 15.5%, growth that the experts linked to growth in wage earnings.

The experts then explain that rising wages are an increase in costs for Chinese firms. China's plentiful, cheap labor situation has turned into a trend of rising labor costs in recent years, affecting the competitiveness of firms. The article notes that rural migrant workers' nonfarm monthly earnings rose 21.2% and broke through 2000 yuan for the first time in 2011.

Rising wages and other costs and prices suggest a substantial real appreciation of the Chinese currency (RMB). The nominal RMB-Dollar exchange rate appreciated 5.1% during 2011. The U.S. CPI was up about 3% in 2011. Take your pick of the above numbers for what Chinese inflation is. In terms of agricultural products China's increase in prices (16.5%) was slightly faster than the year-on-year increase in the U.S. prices received by farmers index (15%), thus the appreciation in the nominal exchange rate of 5.1% accounted for most of the real appreciation in Chinese ag prices--the main driver of China's agricultural import boom.