China has quietly been building up probably the world's largest agricultural insurance program over the last five years. The program was rolled out on an experimental basis in 2007 and was hastily launched as a package of pork industry policies in 2007 when the industry was shaken by widespread disease outbreaks. China's subsidies for agricultural insurance are now the equivalent of $ 1.5 billion. Chinese officials have been pushing the idea of agricultural insurance since the 1990s as part of a broader development of modern agriculture and transitioning from the traditional "depending on the weather to eat" to risk management.

While risk management is a critical problem for Chinese agriculture and insurance is a good idea on paper, the implementation is difficult. Like many of China's agricultural policies, the agricultural insurance program is implemented by giving subsidies to profit-seeking companies as part of their "social responsibility." Like many other programs, this one doesn't work as advertised.

On May 4, the State Council issued regulations on agricultural insurance clarifying the character of the program as government-subsidized commercial insurance with voluntary participation by farmers. According to the Xinhua News Agency's description, the agricultural insurance program has expanded rapidly and is now nationwide in scope but the legal stipulations were incomplete. Xinhua says the insurance program faces problems that include lack of stable government support, unclear definition of rights and obligations of parties, legal obstacles to participation by rural grassroots organizations, and unclear distinction of responsibilities of various government departments. The regulations are supposed to address these problems. 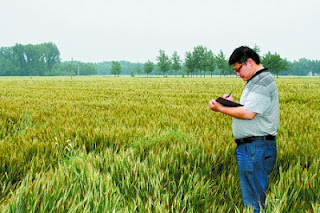 An article from the Henan Daily hails insurance for promoting healthy agricultural development by insuring scattered risks in agriculture. The reporter recounts the story of a villager who discovered his pig sty in flames one cold January morning. After being alerted by telephone, the insurance company adjuster and a veterinary official rushed to the scene where he saw the farmer's daughter-in-law in tears over eight sows that perished in the fire. That afternoon the insurance company issued the farmer 8000 yuan in compensation. The farmer exclaimed, "Agricultural insurance really rescued our family from an emergency!"

At the end of 2011, agricultural insurance in Henan covered 80.9 million mu (about 13 million acres) of rice, corn, and cotton. It also covered wheat, peanuts, soybeans, rapeseed, public forests, reproducing sows and dairy cattle. Over 12 million farmers participated in Henan Province (six times as many farmers as are in the entire United States) and premiums totaled about $184 million.

According to the Henan article, agricultural insurance has a number of problems. One big problem is that the insurance companies lose a lot of money on it due to the "big risk." A company official in Henan says that the company collected sow insurance premiums of 130 million yuan in 2010 but paid out 300 million yuan in indemnities (2010 was a big year for disease. See post, "Sow Insurance Moral Hazard"). Another insurance company man told the reporter agricultural risks are too big, cumbersome and complex...they can't handle it.

With no presence in rural areas, it is hard for companies to verify losses and they often have disputes with farmers. Farmers expect to be compensated for the full value of their crop, but the insurance actually covers only their cash production expenses. A company official says that nearly all claims have to be settled through negotiation.

Some farmers have a traditional concept of relying on "luck" and don't want to pay even the low subsidized premium for insurance, said one insurance official.

The reporter in Henan said he often heard that you can't do agricultural insurance business without a push from the government. (Performance in agricultural insurance work is a factor in job evaluations for some local government officials in Henan.) Since the insurance companies don't have an extensive service network in rural areas it's hard for them to carry out their tasks without help from the network of local officials. Companies say the central and provincial funds for subsidies usually arrive on time but they have a hard time collecting insurance subsidy funds from local governments. According to the Hunan article, the company headquarters collects subsidies from central and provincial government but the local subsidiary has to collect the subsidy from the local government.

The Zhumadian official recounts an incident when hail storms struck the county's 700,000 mu of corn during 2007. The company has about 15 employees in this county, and they spent 3 months trying to assess the damage but never finished the work.

The new regulations are supposed to clear up these problems. But a professor quoted in Henan article observes a fundamental conflict in Chinese policies, most of which are implemented by giving subsidies to companies. Agricultural insurance is fundamentally a policy tool that loses money, but insurance companies are private profit-seeking entities. Without subsidies and tax incentives agricultural insurance can't exist. Says the professor, "If you're looking for short-term profit, it's not in accord with the company's social responsibility."

This gets at the heart of China's approach to policy. Government and companies have an implicit bargain: we'll help you make money if you help us achieve our policy goals. Problems often arise when companies looking for profit recite the slogans but don't keep up their side of the bargain by putting their money where their mouth is.
Posted by dimsums at 7:04 PM