AQSIQ, China's border inspection and quarantine agency, announced that four shipments of U.S. pork were rejected during March because ractopamine was detected in the meat. The shipments totaled 103 metric tons of frozen pork, pig feet, and hindquarters. They arrived at ports of Zhuhai, Xiamen, and Tianjin. The timing of the announcement is interesting, coming at a time when authorities have been looking for ways to pull Chinese pork prices out of their downward trend. Articles in the Chinese news media describe the rejections in a manner that sows fears of imported pork in the minds of Chinese consumers. 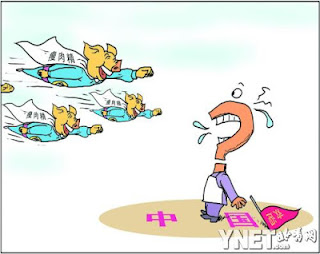 First, some background: The catch-all term "lean meat powder" (瘦肉精) is commonly used in Chinese to refer to about half-dozen different pharmaceutical beta agonists that can be given to pigs to channel the energy from feed into building muscle instead of fat, thus using feed more efficiently to produce what consumers want. The drugs conserve feed since it takes more kilograms of feed to create a kilogram of fat than a kilogram of muscle. “Lean meat powders” include clenbuterol, ractopamine, salbutamol and several other substances. All of them were declared illegal for use in animals in China over 10 years ago (although production of the drugs was not outlawed until last December). Clenbuterol is the one most often used in China and it can cause symptoms like heart palpitations and headaches. Ractopamine is a safer alternative that is expelled from a pig’s body in a matter of hours. Ractopamine is approved for use in the U.S. but is banned in China. (Clenbuterol is also used by humans as a drug for weight loss, asthma treatment and body-building; ractopamine was developed strictly for animal use.)

The Xinhua News Service article identified ractopamine by its Chinese name (莱克多巴胺) and in parentheses added "commonly called 'lean meat powder,'" subtly planting the notion that ractopamine and "lean meat powder" are one and the same. Other articles appear to quote from Xinhua using similar language. 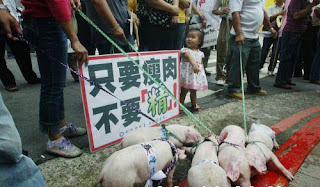 This photo appeared with an article about rejected pork shipments.
The sign reads, "Just want the lean, not the powder." (Source: Securities News)

The Xinhua article then repeats the official argument used by Chinese officials for banning ractopamine. The article explains that "lean meat powder" residues accumulate in the internal organs of animals which are not generally eaten by people in western countries [by implication Chinese officials say it is appropriate for China to ban ractopamine since Chinese eating habits differ]. So, the article says, the use of "lean meat powders" is legal in the United States and Canada. This is not true. Ractopamine is legal in the U.S. but clenbuterol is not.

The article then states that ingesting "lean meat powders" as food can cause muscle tremors, headaches, nausea and in serious cases, death. These symptoms have resulted from eating pork organs containing clenbuterol in China. But no incidents of human sickness due to ractopamine in meat have been reported anywhere to this blogger's knowledge.

An article from the Business News Net accurately describes ractopamine as a kind of "lean meat powder," supplies accurate facts about ractopamine and distinguishes it from clenbuterol. However, this one also subtly plants fears of imported pork.

This article reports that AQSIQ's list of rejected shipments included 33 shipments of "foreign pork" rejected for testing positive for ractopamine. The total volume rejected was nearly 1000 metric tons and half was from the United States.

The Business News article cleverly stokes fears about imported pork while appearing to allay consumer concerns. The reporter assures readers that the rejected pork had not been purchased for distribution to supermarkets. A Beijing subsidiary of COFCO that imported one of the rejected shipments said the pork was to be supplied directly to food service establishments. The COFCO spokesman said that all of his company's pork that goes to dinner tables of the common people is raised by the company itself according to national standards and can be eaten with assurance. 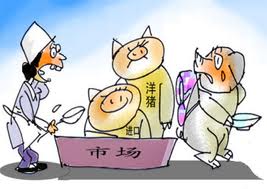 The reporter pushes the knife in and twists it: "In fact, this is not the first time imported pork has tested positive for ractopamine. A list on the AQSIQ web site for January 2011 to March 2012 contained 33 shipments of pork rejected for ractopamine residue."

The Business News reporter does distinguish between ractopamine and clenbuterol. He quotes an animal nutrition researcher at the Guangdong Academy of Agricultural Sciences who explains that the United States has strict limits on dosage for ractopamine and a withdrawal period before slaughter to ensure that residues are expelled from the animal. An official of the China Livestock Association says, "Ractopamine is not as potent as clenbuterol but if it is used there are some residues and you have to conduct strict tests."

The reporter raises the question, "If China and the U.S. have differing standards, why does China import U.S. pork?"

The livestock association official has an idea: "The foreign pork quality problem is exposed not only due to differing standards but also because the price of Chinese pork is higher. Some bad traders took the opportunity to peddle problem pork to China."

The official has an axe to grind: "China should maintain its self-sufficiency; we are fully capable of doing this!"

The Business News article reports that the U.S. FDA and the UN permit ractopamine residues up to certain limits. Science has demonstrated that ractopamine is safe when used properly. However, in the land supposedly guided by the "scientific outlook on development," science is only used as a guide when convenient. "Old hundred names" still makes his decisions based on cartoons of flying pigs.