The National Bureau of Statistics reported that rural household income rose faster than urban income in percentage terms during 2011. However, rural Chinese people remain poor in absolute and relative terms. Agriculture is now a minor source of income for rural households. "Rural" is no longer synonymous with "agriculture."

The statistics are based on NBS's household surveys: 74,000 rural households and 66,000 urban households who fill out records of income and expenses over the course of the year. The average per capita rural household income was 6977 yuan in 2011, about $1090 per person per year or $3 per day. The average income was up 17.9% in nominal terms and 11.4% in real terms after deducting inflation. The increase was .5 percentage points faster than in 2010.

The rural population is slowly being transformed from "farmers" to "workers." Rural income from salaries and wages averaged 2967 yuan ($464) per person and was up 21.9%. Wages contributed 42.5% of rural income (up 1.4 percentage points from 2010) and accounted for half of the growth in rural income.

Rural net income from agriculture averaged 2520 yuan ($394) per person. This accounted for 36 percent of rural income--less than the 42.5% from wages. Of the agricultural income, 1897 yuan came from crops and 463 yuan came from livestock. Net income from growing crops was up 10%--60% of the increase was due to higher crop prices and 40% was due to increased volume of sales. Livestock income was up, primarily due to higher prices, after two years of declines. The report noted that farmers who grew cotton and potatoes had low income or even losses due to declining prices for their crops.

An interesting comparison is this: the increase in average urban household income (2700 yuan) last year was equivalent to 39% of rural income and was more than rural households earned from farming (2520 yuan).

Rural income from operating manufacturing and service businesses averaged 702 yuan per person. Service business income was up 21.4% but manufacturing income was up a less robust 5.8%.
As the share of income derived from agriculture falls, Chinese officials worry that their peasant class are losing interest in farming. Solution: give them stipends from old-age pensions and land rent and warehouse them in apartment blocks. Turn the fields over to companies and big professional farmers. 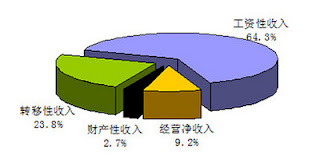