Last week a Beijing reporter exposed the processing of dead chickens and other nasty practices that take place in slaughterhouses. 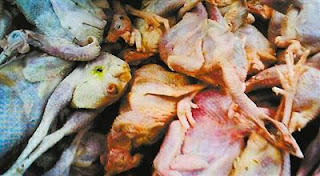 Dead chickens with green spots and red skin found in a slaughterhouse.

According to the article, nearly every load of chickens includes dead ones--sometimes a few, sometimes dozens. They may die of disease, suffocate or freeze to death during transport.

The worker describes the arrival of a small van in the courtyard. The buyer asks to purchase as many dead chickens as the slaughterhouse can supply. Fifteen crates of chickens, some of them with green spots and decomposed, were loaded in the van. The worker showed the reporter records of sales of dead and deformed chickens to particular individuals during October and November.

A Beijing Agricultural University veterinary professor said that it is unsafe to eat dead chickens. After decomposing the carcasses may contain toxins. If they died of disease they could carry germs that could be transmitted to humans. 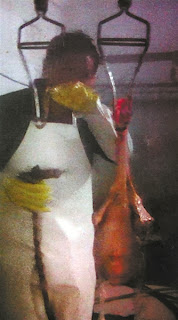 Another nefarious practice is the injection of water into carcasses to increase their weight. The reporter describes an assembly line in which a worker wields a gun that shoots pressurized water through a pair of needles into each chicken carcass just below its wings.

A third practice turns white-skinned chicken carcasses into fake yellow-skinned chickens that look like a local variety of chicken that brings premium prices. To do this, the slaughterhouse sets carcasses out on large tables and blows a fan on them for an hour or more. The skin hardens and turns yellow through this process. These fake yellow-skin chickens are mixed in with real ones to trick consumers, the reporter says. The slaughterhouse can sell 1000 of these fake birds per day. 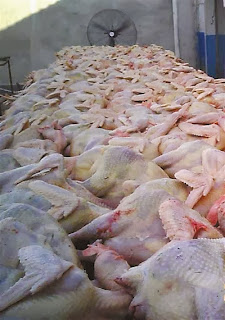 Fan blowing air on chickens to turn them yellow

According to the slaughterhouse worker, they blow the fan on the chickens indoors during the summer because they decompose faster and attract flies.

On December 15, animal health inspectors raided the slaughterhouse and found 2,880 kilograms of uninspected poultry meat. The slaugterhouse had an animal quarantine inspection certificate and animal health license hanging on the wall but both were expired.

This article looks like adventurous investigative journalism but it may actually be government-approved propaganda. The article was widely disseminated on Chinese web sites, recites regulations on meat slaughter and urges readers to be vigilant in preventing spread of highly-pathogenic avian influenza. The reporter apparently accompanied officials on the December 15 raid.

Apparently authorities have decided to air some of this dirty laundry to alert the public and crack down on risky practices that could spread avian influenza.
Posted by dimsums at 10:48 PM

This is so horribly sad. Thank you for the information.