A County's Big Plans for Pigs

A county in Heilongjiang Province recently published a lengthy description of its economic development plan based on pigs which opens a window on the quiet--but big--transformation of China's pork industry. It also reveals some of the organizational strategies common in China: a merger of communist party officials, big companies, farmer cooperatives, and dreams of organic riches from "green" food. 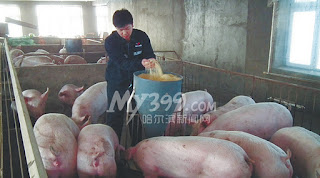 Bayan County is one of the leading grain-producing counties in China. But officials there are looking to change its status as a county of "farmers rich, financially-poor" by developing the pork industry in a big way. With its abundant grain supplies, officials want to turn the county into a "hog-grain capital" that produces a nationally-known brand of pork. The county's hog production grew from 400,000 head annually in 2002 to 3.2 million in 2011.

The article describes several women who run pig farms. (Many articles feature ladies raising pigs; it seems to reflect a national strategy to encourage women to get into the pig business.) One lady graduated from Northeast Agricultural University and returned to her village to raise pigs instead of going to the city. Another lady, daughter of a prominent hog farmer, got 27,000 yuan in gifts at her wedding which she invested it building a pig barn; she now raises about 200 pigs while her husband works in town managing the highway.

Officials recognized that farmers needed an outlet for their pigs, so in 2005 they made pilgrimages to Shandong,  Sichuan and other places to try to lure a meat company to Bayan County. After seeing their "beneficial policies, sincere feelings and solemn commitment," several companies have set up shop in Bayan. Jinluo and Yurun, two of the largest meat companies, have made commitments to build processing plants. Jinluo's plant has a capacity of 1.5 million head and one of the six projects planned by Yurun has a capacity of 1.8 million. These two combined have a capacity that exceeds the county's current hog output. 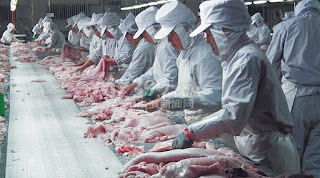 New company-operated breeding farms are being set up and a new feed mill is scheduled to open in March.

Bayan's hog industry includes a combination of big industrial operations and small farmers united in cooperatives. Bayan County has nine farms raising 10,000 or more hogs and many others raising thousands of hogs annually but it also has 32,000 farmers raising 50 or fewer hogs.

Cooperatives are another emphasis of the Bayan strategy. Traditionally, each farmer operated independently, using his/her own breeds, management, feed, etc. and when they sold pigs they were at the mercy of brokers and slaughterhouses who set the price. The cooperative strategy aims to unite farmers so they can jointly purchase the same breeds of piglets, feed, and veterinary drugs and get training and services. They are supposed to use their negotiating power to get better selling prices for their finished hogs from the slaughterhouse.

A farmer named Zeng says that he struck a deal to supply pork to a market in Harbin City in 2006, but he couldn't produce enough hogs to meet his commitment. He ended up getting 75 farmers together to start a cooperative connected with a breeding farm. An official says there were only two hog-raising cooperatives in 2006, but they now have 34 cooperatives with 100 members or more.

These cooperatives are still relatively small. Another strategy is to link up small cooperatives in cooperative unions that are big enough to set up their own brands of pork. This reflects another strategy (apparently borrowed from the Europeans) of brands based on geographic location. The county is trying to establish a trademarked "Bayan pork" brand to sell nationwide.

Another facet of the strategy is to produce "green" pork in order to earn a higher profit. "Green" pork standards call for raising pigs without antibiotics, hormones, "lean meat powders", dyes or other additives, and using "green" feed (not explained, but probably limited pesticide use and soil and water free of toxins like heavy metals). Farmers use a bed with a wooden frame (in contrast to the usual concrete pens) that keeps pigs dry and keeps them from developing sores. Their housing is kept at a constant temperature. In the summer the windows are covered with a curtain and fans are run to keep the barn ventilated.

Officials emphasize that farmers can earn big profits selling premium-priced "green" pigs. What they may not have counted on is that the premiums may shrink and disappear as they flood the market with "green" pigs. Moreover, the usual pattern is that a successful premium-priced product draws imitators out of the woodwork. Their fakes then undermine consumer confidence in anything labeled "green Bayan pork" and the price premium disappears.

Good luck, Bayan. Maybe you'll succeed where dozens of other counties have failed with similar plans.
Posted by dimsums at 7:41 PM

Your content really informative as well as helpful for my China Piglet Feed Market Research and Development.